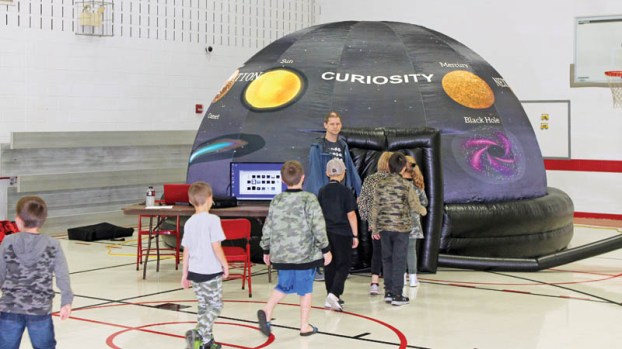 Grand Rapids, Michigan company Matrix Entertainment had its Dome Theater set up at Rock Hill Elementary Thursday for the students to learn about various scientific topics.

PEDRO — The students at Rock Hill Elementary had a little more fun with their science lessons on Thursday, as Matrix Entertainment, out of Grand Rapids, Michigan, had its Dome Theater set up in the gymnasium, offering a mini IMAX experience.

“We cover everything science related; space, the ocean, weather, the Titanic, molecules, the human body and more” Eric Bradford, with Matrix Entertainment, said. “We have our  Dome Theater here, which projects across the top of it while the students are able to watch and learn.”

The school’s science teachers chose which topics were shown to their students to go along with lessons they were already teaching, or were going to soon start, including the Dinosaur Prophecy, the Night of the Titanic, Time Space, Habitat Earth and Into the Deep.

“My class watched the Night of the Titanic, which goes along with the standards that I teach, along with the movie,” fourth grade science teacher Lindsay Pernestti said. “The kids were really in awe of it. The graphics were amazing, the atmosphere is different and unique, and it’s very educational.”

Pernestti added that the showing of the Night of the Titanic was very in depth, covering the icebergs themselves, the temperature of the water and the logistics of the ship.

“The kids were able to learn through detailed graphics of what and why it happened,” she said. “And it’s also a little bit of history as well.”

Fred Evans, principal at Rock Hill Elementary, said this was the first year the school brought exhibit down, and that it was a big success with the students.