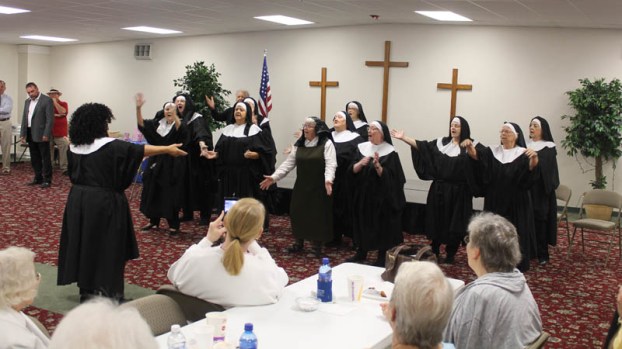 A group of seniors from the Sybene-Chesapeake Senior Center perform a lip sync from Sister Act at the center's luncheon this past Friday at Proctorville First Baptist Church.

PROCTORVILLE — As it does every last Friday of the month, the Sybene-Chesapeake Senior Center had its luncheon this past Friday at the Proctorville First Baptist Church.

This event was extra special, however, as a group from the senior center performed its lip sync performance from Sister Act, which was originally done for the Lawrence County Domestic Violence Shelter’s fundraiser earlier this year.

Along with the senior performance, Lawrence County Treasurer Stephen Dale Burcham, Lawrence County commissioner DeAnna Holliday and Lawrence County Municipal Judge and common pleas candidate Donald Capper performed their act of Justin Timberlake’s “Can’t Stop the Feeling,” which was also originally performed at the  fundraiser, in front of the crowd.

Forum takes place at Burlington Elementary BURLINGTON — Those seeking local and regional offices made their case in person to... read more