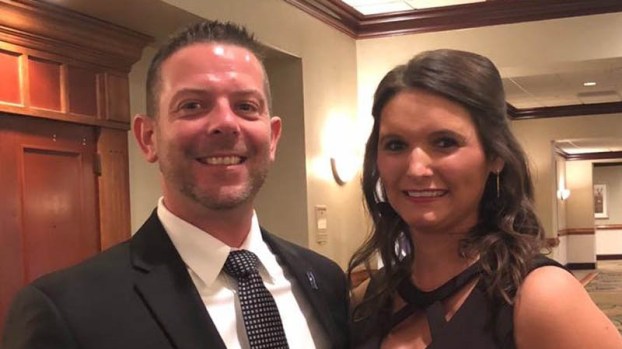 1996 Ironton High School graduate Jeffery Myers and his wife, Amanda, after Myers was elected President of the Kentucky Association of Chiropractors.

Dr. Jeffery Myers, a 1996 graduate of Ironton High School, was elected President of the Kentucky Association of Chiropractors last month at the annual KAC Convention and Awards Banquet at the Embassy Suites in Lexington, Kentucky.

Myers currently serves as the Chairman of the Insurance Relations Committee, and has recently served a term as the second vice president for the association as well.

In addition to being elected president of the association, he was also awarded for his dedicated and outstanding work on the Insurance Relations Committee, and at last year’s event, was named Chiropractor of the Year.

The Kentucky Association of Chiropractors is the largest chiropractic association in the state.

Myers has been a practicing chiropractor for the past 14 years, and is supported by his wife, Amanda, and their three children, Carleen, Collin and Casen.

For the past 12 years, he has worked at Lakeway Chiropractic Center in Russell Springs, Kentucky, where he and his family reside.