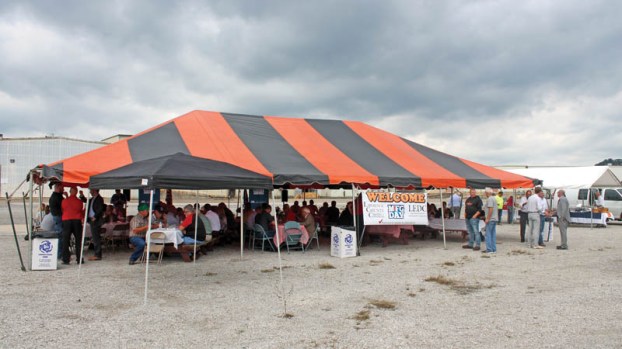 Lawrence County Manufacturing Day took place Thursday at a site in the Ohio Southern Industrial District, property of the Lawrence Economic Development Corporation (LEDC) and formerly Dow Chemical property, on County Road 1A. The event was put on by the Lawrence County Chamber of Commerce and the LEDC.

Around 150 people gathered at a site in the Ohio Southern Industrial District, former property of Dow Chemical and now property of the Lawrence Economic Development Corporation (LEDC), for Lawrence County Manufacturing Day on Thursday.

Dr. Bill Dingus, executive director of the LEDC, welcomed the crowd after lunch was served, and spoke about the importance of Manufacturing Day before introducing the speakers.

One of the speakers at the event was Jeanne Wilson, a senior Appalachian regional representative for U.S. Sen.Sherrod Brown, D-Ohio, who read a statement from the senator.

“Manufacturing jobs are vital to our state, and often a ticket to the middle class. This industry lifts families up with good wages, good benefits and opportunities for career advancement. That’s one reason the manufacturing industry has the strongest multiplier effect of any industry. For every $1 we invest in manufacturing, we add an additional $1.48 to our economy,” Brown’s statement read. “I am working with folks on both sides of the aisle, industry partners, schools and workers to make sure that Ohio manufacturing thrives for generations to come…”

One of the biggest aspects of the day was the recognition of Collins Career Technical Center student Ian McCleese, who won the national HVAC championship earlier this year.

Wilson also presented McCleese with recognition from Brown’s office for winning the competition and, in addition, the Lawrence County Commission, U.S. Rep. Bill Johnson, who was represented by his field representative, Juli Stephens, Ryan Smith, speaker of the Ohio House of Representatives, also represented by Stephens, and the Lawrence County Chamber of Commerce itself, also honored McCleese.

McCleese’s teacher at CCTC, Wes Menshouse, also spoke about what it was like to teach such a talented student.

“Being able to teach Ian has been unbelievable,” he said. “He’s the only one from Collins who has ever won the national competition, and now he has a chance to go to Beijing, China to compete against all of the winners from other countries. He also has a ton of scholarship dollars available to him, and I can’t say enough good things about him.”

The guest speaker for the event, Mike Otworth, CEO of Innventure and PureCycle Technologies, closed out the ceremony.

Otworth is the founding CEO of Innventure, an entity created to work in partnership with Fortune 500 companies to evaluate, scale and commercialize disruptive technologies with significant market potential.

Otworth began his career on Capitol Hill, working as a legislative aide and committee staff member in the U.S. House of Representatives after graduating from Otterbein University with a B.A. in political science and biology.

“My parents and grandparents were from Portsmouth, so I remember being around this area when I was younger. I spent a lot of time in Columbus, but I remember Portsmouth being a very different place than it is today,” Otworth said. “A friend of mine showed me a Portsmouth Daily Times newspaper from the 1960s, and I noticed all of the ads in it, with manufacturing companies being the anchor.”

He said that although a lot of the manufacturing jobs in the region have gone away, work being done now to bring that back is going very well.

“Southern Ohio is doing a good job of pulling itself back up by the bootstraps,” he said. “Dr. Dingus and the LEDC are really doing a lot to try to keep manufacturing alive and well in our region.”

Otworth’s company, PureCycle, which is under the Innventure umbrella, will take plastic waste and turn it into reusable material. The plant is currently in the works near the site of the event.

Dingus said that the work the LEDC does is for the good of Lawrence County and the region, and recognizing Manufacturing Day each year is a big part of that.

“Lawrence County is on the move,” Dingus said. “Our goal is to annually increase the number of manufacturing jobs in the county by multiple amounts. We have great workers, great opportunities and great resources, and our goal is to unite those to create more jobs. I’m a true believer that most of the problems we have in Lawrence County could be solved with more jobs.”