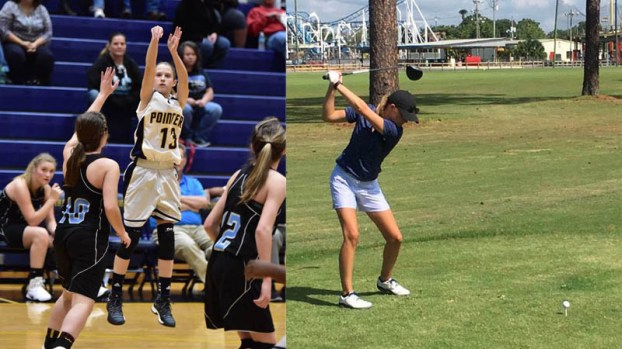 SOUTH POINT — Since about the fourth grade, South Point High School junior Emilee Carey has been dealing with scoliosis, and was forced to wear a back brace for much of the past six years.

“I wore my back brace for about five and a half or six years for 23 hours a day,” Carey, who plays golf and basketball for the Pointers, said. “The only time I got to take it off was when I took a shower, went swimming or played sports. But I haven’t had to wear it since September of last year.”

It was around that time that Carey found out she was going to need back surgery for a stress fracture in her lower back, forcing her to miss her sophomore basketball season.

Carey said that although her surgery wasn’t directly caused by her scoliosis, her doctor said the stress fracture might have had something to do with the brace she wore.

“The doctor said that wearing the brace might have made my muscles weaker,” she said. “And they couldn’t protect my bones as much as they should have.”

In November of last year, Carey had her surgery, and was able to begin physical therapy in March.

Carey followed up with a great season in AAU basketball this year, and won third place in the Ohio Valley Conference golf tournament for South Point. In addition, the South Point High School girls golf team made it to districts for the first time in school history.

As far as looking forward to this basketball season for South Point, Carey, who plays point guard and shooting guard, said she couldn’t wait to be back with her team.

“I’m just looking forward to being back with all of my teammates and playing with them,” she said.

3 get prison sentences at common pleas