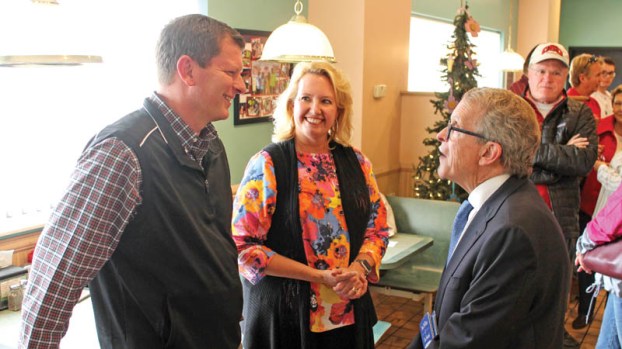 SOUTH POINT — Ohio Republican gubernatorial candidate Mike DeWine made a stop in Lawrence County on Monday, visiting the Snak Shak in South Point ahead of the Nov. 6 general election next week.

Members of the Lawrence County Republican Party and guests were able to speak to the candidate and hear his latest push toward getting elected, which included urging voters against passing State Issue 1, his desire not to raise taxes and more.

“One of the big differences in this election between myself and Richard Cordray is the drug issue,” DeWine said. “I have a 12-point plan that includes education prevention on the drug issue from K-12. I think that educating our students on it, beginning at a young age, will make a big, big difference.”

DeWine went on to talk about State Issue 1, which would reduce the penalties associated with obtaining, possessing and using illegal drugs, as well as reduce prison sentences for those eligible by one-fourth, if passed.

“State Issue 1 is an absolute disaster,” he said. “Drug dealers could be found in possession of enough fentanyl to kill 10,000 people, and if that passes, it would no longer be a felony. It would be a misdemeanor with no jail time.”

He added that if also passed, Issue 1 would create a “safe haven” for drug dealers in surrounding states to come into Ohio to sell drugs and face lesser penalties.

Another difference DeWine pointed to between him and Cordray is taxes.

DeWine said he wants to bring back the thousands of jobs that were lost in the past eight years, ensure that every student graduating from high school is truly college or workforce ready, and move Ohio forward.

Jason Stephens, Lawrence County Auditor and Chairman of the county Republican Executive Committee, said he was glad DeWine was able to make one last stop here before election day.

“I think it’s good for Lawrence County,” Stephens said. “Mike DeWine has been coming down to Lawrence County for 20-plus years, and we’re glad to have him here before Election Day. And hopefully everyone gets out and votes on Tuesday.”