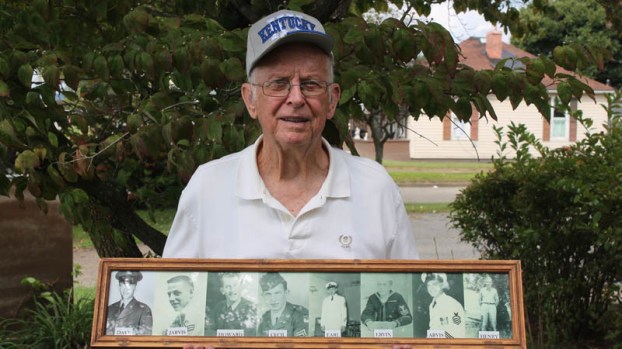 South Point veteran Cecil Daniels remembers serving in the military with his seven brothers. He is holding a frame with photos of each of them, and together, they have more than 100 years of service.

South Point veteran Cecil Daniels’ story is unique, and almost one of a kind, as he and his seven brothers all served in the United States military, with more than 100 years of service among them.

“All eight of us were raised in South Point with the same mother and father,” Cecil, 89, said. “And we all came back alive.”

Cecil was the fifth oldest of the siblings, and served as a medic in the dental field in the U.S. Army while the Korean War was going on, although he was not in Korea at the time.

“My oldest brother Henry was the only one who was drafted, but we all enlisted after that and were raised to honor your country,” Cecil said. “My parents were very proud of all of their children. With my brothers, sometimes we had our differences, but we were all family and we loved each other no matter what.”

Cecil said that only he and Howard are still alive, but that the military tradition was still carried on, as Howard’s son, Earl Daniels, retired as a lieutenant colonel in the Marines.

“Earl was nicknamed ‘The Duke,’ and was the one who flew around President George H.W. Bush’s helicopter,” Karen Daniels, Cecil’s daughter, said. “He did that for five years.”
Karen added that she is very proud of her father, and the family’s military tradition.

“I’m so proud of him and everything that he’s done,” she said. “It’s just amazing that all of his brothers served this country and were able to make it back.”

Besides serving in the military, Cecil was on the South Point Village Council for 29 years, and has been a Mason for 70 years.

‘I have a story to tell you’