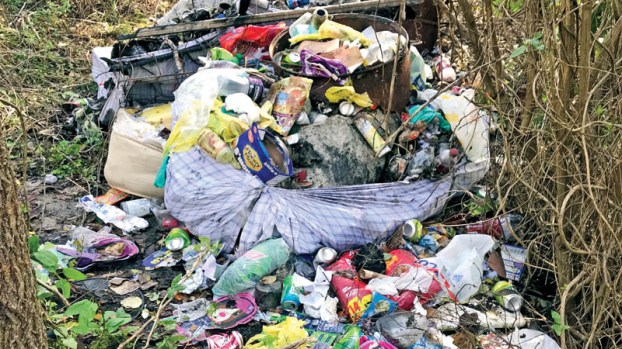 A dumpsite recently found at the Lawrence Furnace Cemetery on Old State Route 522 in Pedro. An Ironton woman pleaded guilty to littering this week and was charged in Ironton Municipal Court.

“An elderly gentleman made a complaint to our office about two weeks ago when he went to visit his wife’s grave and saw an entire dumpsite as he pulled up to her grave,” Hileman said. “He spoke with me directly, and I asked him if he could meet me at the cemetery, and he did.”

Hileman added that the dumpsite was no more than 50 feet from the man’s wife’s grave.

“I’m not going to get into detail about how we figured out who it was, but that’s how it got started,” Hileman said. “This is disgraceful, and I think it’s completely awful what this woman did. It’s cases like this that really hit home.”

Whitney Waulk, 21, of Ironton, pleaded guilty to littering, and was sentenced to 30 days jail suspended and ordered to complete 60 hours of community service and pay a $500 fine, court costs and probation costs. She was also given 30 days to clean up the property.

Hileman, along with Lawrence-Scioto Solid Waste Management District Director Dan Palmer, said that anyone who breaks the law, either misusing the district’s recycling bins or illegally dumping, will be prosecuted to the fullest extent.

The Lawrence Furnace Cemetery is located on Old State Route 522.