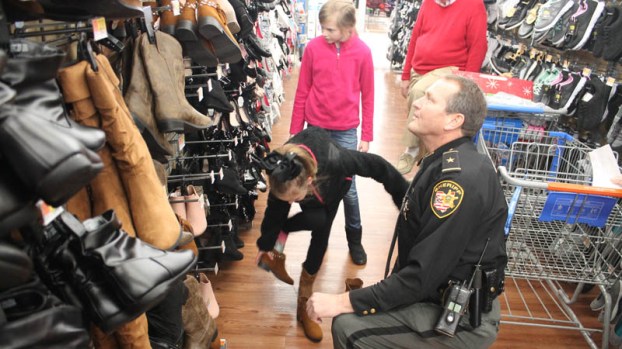 “We’ve done this for about 10 years now, and it’s a joint effort between the state highway patrol and the sheriff’s office. Other departments take part as well,” Lawrence County Sheriff Jeff Lawless said. “It’s something that police and other officers try to do for the children in need in our county, and it helps restore their faith in law enforcement.”

Lawless added that one of the hardest parts of the event is that no matter how many children and families get helped, there are always more who are also in need.

“We rely heavily on the school administrators to provide us with the names of children who are in need, and we also include children who we meet on the street that we identify as in need, or if someone calls and asks to be put on the list, we decide if the need is legitimate,” Lawless said. “We have about 42 families tonight, but it’s hard because there’s probably another 100 that need this.”

Each child who participated had a limit of $175 to spend on whatever they wanted, with many getting clothing and toys.

Dawson-Bryant Elementary student Brady Waddell, 10, was one of those who participated in the event, and said he had a good time.

All of the money for the event is provided through donations, with some of the notable donors this year being Bob and Linda Vinson, of Spectrum Outreach Services, Conley Insurance and others.

After shopping, each family was also gifted a food basket, and Slack and Wallace Funeral Home, of South Point, provided dinner for everyone at Ponderosa following the event, where Santa Claus was also present.

“For us to be able to provide for the less fortunate really is a great thing,” Lawless said. “It’s a true blessing for us.”

St. Lawrence fifth grader is runner up For Hannah McKenzie, of South Point Middle School, the third time was the... read more