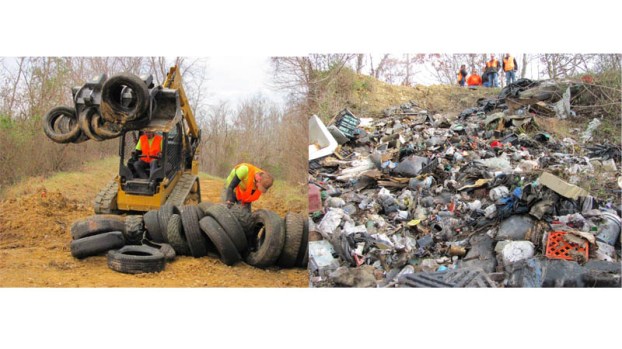 This past week and next week, crews from the Ohio Environmental Protection Agency (EPA) are assisting the Lawrence-Scioto Solid Waste Management District with the cleanup of several dumpsites throughout Lawrence County, containing tires, garbage and more.

Out of 14 dumpsites containing tires that have been cleaned up or are ready to be cleaned up, the worst instance, so far, was at the site of the Crown City Wildlife area off of Greasy Ridge Road in the Chesapeake area. Lawrence-Scioto Solid Waste Management District Director Dan Palmer said this site contained an estimated 2,500 tires, as well as numerous syringes, electronics, appliances, trash and more.

“We are very fortunate to have the Ohio EPA down here in Lawrence County this week and next week until these projects are all cleaned up,” he said. “This Crown City Wildlife area site, in particular, though is disgraceful. And this is state-owned property that people are dumping on.”

Palmer said that in addition to the tires and trash, the Ohio EPA almost called off the site cleanup completely due to the amount of syringes also discovered, adding that there were about 1,200 to 1,400 needles found.

Lawrence County Commissioner DeAnna Holliday, who went out to the site with Palmer on Tuesday, agreed and said she is happy to be a part of making a positive difference.

“I feel so blessed to be able to be a part of this and have the opportunity to partner with the solid waste district and the Ohio EPA to accomplish this desperate need,” Holliday said. “We all need to be working together if we are going to stop this problem.”

Holliday added that through talking with members of the Ohio EPA, she found out that Lawrence County is the worst in Ohio with a dumping issue, which saddened her. Palmer added, however, that out of all 88 counties in Ohio, the Ohio EPA has never had a county commissioner get involved, which made him proud.

As a solution to the tire and garbage-dumping problem, Holliday said that she is in the beginning stages of forming drive called “Project First Impression,” where residents, elected officials or civic groups can come together to help the issue.

“I want to start by forming a committee with some of the judges, the prosecutor and any elected official or citizen who wants to participate,” she said. “And what I would like to see is for it to eventually turn into a community-wide effort with volunteer groups all throughout the county cleaning up, using all of the resources that we have.”

She added that she has also looked for opportunities to obtain litter control grants and other similar forms of funding to assist with the issue as well.

“I love the outdoors, and enjoy hiking, hunting and fishing. When I saw what was out there at the Crown City Wildlife area, it was very sad,” she said. “And as a county commissioner, I’m always trying to get people and new businesses to take up residency in Lawrence County.

Cleaning up these dumpsites will go a long way in making that happen. I always say that you never get a second chance to make a first impression, and that’s the reason why I named it ‘Project First Impression.’”

Palmer said that the district is continuing to crack down on illegal tire and garbage dumping, and has the support of the judges in the county, as well as the county prosecutor. He added that support from the public is critical, however, because the district is unable to see and catch everyone doing these things.

“If we are going to make a serious difference with this issue, we need everyone working together; including the sheriff’s office, the state troopers and all of the police departments throughout the county. Under the law, you’re only allowed to have 10 tires in your truck if you don’t have a tire transportation certificate from the Ohio EPA. If any law enforcement sees someone driving with tires, pull them over and ask for the certificate,” Palmer said. “If any citizens see people illegally dumping tires or garbage, contact us at the district. If it’s after hours, we’ll take care of it in the morning. If it’s a more urgent situation, contact the sheriff’s office.”

Under state law, open dumping of scrap tires is an unclassified felony that carries fines from $10,000-$25,000 and incarceration of two to four years.

“We will prosecute to the fullest extent on this issue,” Palmer said.

Holliday added that in addition to federal or state fines, Lawrence County is also looking into their own fines for people who violate.

The district provides several events throughout the year for people to properly dispose of materials instead of illegally dumping them, Palmer said. In addition, the Ohio EPA’s No-Fault Program, formerly known as the Consensual Scrap Tire Removal Program, is available to dispose of tires if qualification is met. The program may assist many government and local government entities by using state contractors to remove and dispose of open tire dumps. Sites must contain between 100-5,000 scrap tires and may be any size, either un-mounted or on rims.

Anyone interested in applying for this program or obtaining a tire transportation certificate, or wanting more information, can contact the Ohio EPA at 614-644-2621 and ask to speak to someone from the Scrap Tire Unit. Applications are also available at www.ohioepa.gov.

The Lawrence-Scioto Solid Waste Management District can be reached at 740-532-1231.