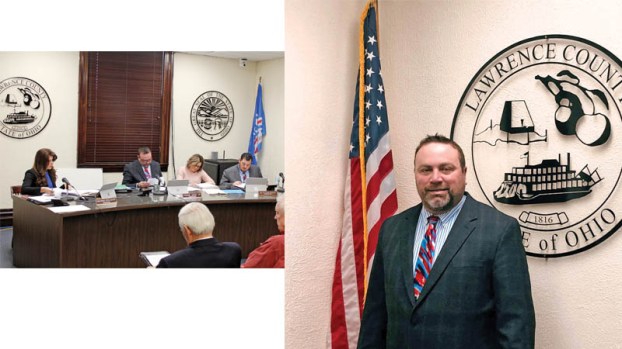 The Lawrence County Commission voted to make Commissioner Freddie Hayes Jr. its new president of the board, with Commissioner DeAnna Holliday serving as the vice president.

“I’m honored this year to be the president of the commission,” Hayes said. “This last month or so has been very hard on me, but Bill (Pratt) would want me to do this, and I’ll do the best that I can this year.”

The first county commission meeting of the year took place on Monday, which was also the first meeting with new commissioner, Colton Copley, who was appointed to the board by members of the county’s Republican Central Committee back at the end of December.

During the commissioner’s reports, Holliday announced that the Sam’s Club and Walmart entrance off of U.S. 52 in South Point near Wendy’s and Speedway was approved for an intersection upgrade, which is scheduled to begin in 2020. Funding for the project will come from KYOVA and ODOT. She also said that the Joint Response Operations Center (JROC) in Coal Grove is very close to being occupied.

Hayes talked about growth in the county, adding that Taco Bell is now in Proctorville with Captain D’s also looking at the village to locate.

Lawrence County Treasurer Stephen Burcham, who is also the head of the county Land Bank , talked about the success the Land Bank had this past year, with the completion of its 100th demolition of the former Pulley Nursing Home in South Point in June, adding that the land bank has completed 159 demos to date with another 20 to be put out for bid.

He also said that another 400 properties have been identified as possible projects.
Burcham also said that first half tax bills were mailed out this past Friday, and are due March 8. Second half taxes will be due July 5.

Lawrence County EMS administrators Lori Morris and Mac Yates said that the agency was able to recently purchase five new Lucas devices, battery powered devices that provide chest compressions to help with CPR, making their total seven, which allows all of the primary ambulances to have them on board. In addition, Morris and Yates met with the contractors and designers of the new EMS station at Rock Hill to go over the blueprints on Tuesday.

• Received and referred the petition for Private Drive 266 in Rome Township to the Lawrence County Engineer’s Office.

• Received and referred the petition regarding Township Road 215/Gilruth Lane to the Lawrence County Engineer’s Office.

• Approved and signed the 2019 General Services Amendment for the Lawrence County Airpark, as requested by Jeffrey Kramer, Stantec Consulting Services.

• Approved and signed the Amendment No. 1 Engineering Services Agreement with an increase of $676, as requested by Jeffrey Kramer, Stantec Consulting Services.

• Accepted the approval for McCown and Fisher LPA, contractor bid of $85 per hour for legal services to be provided to the Lawrence County Department of Job and Family Services Child Support Enforcement Agency from Jan. 1, 2019 through Dec. 31, 2019.

• Approved and Issue to Bid for the Lawrence County Department of Job and Family Services for HVAC preventative maintenance, repair and emergency services. Contract term is Feb. 1, 2019 through Jan. 31, 2020, as requested by Terry Porter, DJFS director.

• Approved and signed the 2019 Cebco Wellness Grant Agreement and appointed Summer Riley as the designee. Administrative funds are $4,000.

• Received and filed the 2018 year end appropriations and transfers, as requested by the Lawrence County Auditor’s Office.

The county commission meetings will be at 10 a.m. on Tuesdays in the commission chambers on the third floor of the Lawrence County Courthouse for the rest of the year.