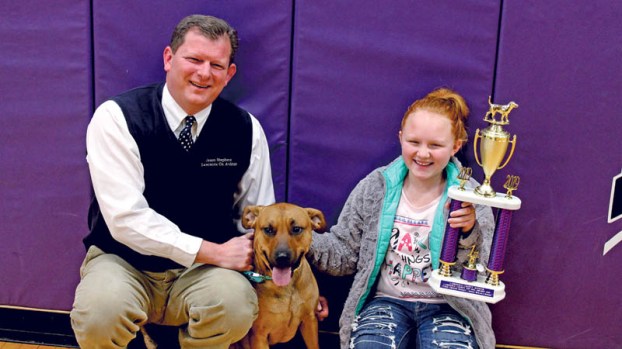 Lawrence County Auditor Jason Stephens presented the “Top Dog” trophy, along with a certificate, to Burriss on Friday at the school after reading her essay in front of all of the fifth graders, before her family surprised her by bringing the dog out. Stephens’ office also holds the No. 1 dog tag for the winning dog.

“My sister has a dog named Tyson. Tyson even has a middle name, so his full name is Tyson ‘Chicken Nugget’ Malone. He is a rescue and the shelter found him,” Burriss wrote in her essay. “…She got him from the Lawrence County pound, and now he lives a happy life. A couple weeks ago, she adopted a dog named ‘Bee’ and now Tyson has a sister and a happy family!”

Stephens said this is the sixth or seventh year that his office has conducted the contest, which is an effort to increase dog licensing in Lawrence County.

The contest was open to all third, fourth and fifth graders in the county to write about their dogs, and why they thought theirs should be named the county’s “Top Dog.”

Stephens said that 188 students took part in the essay this year, which is the most participation he has seen since the contest was started.

Those in the auditor’s office then judged all of the submitted essays.

“I didn’t know it was going to be me,” Burriss said of winning the contest. “It feels amazing.”

Tags at the auditor’s office are $12 for the year, and $12.75 at the other locations.
Tags may also be purchased online at the Lawrence County Auditor’s Office website, www.lawrencecountyauditor.org, for $14.

Children packed the activity room at the Briggs Lawrence County Library in Ironton on Wednesday for an art project, led... read more