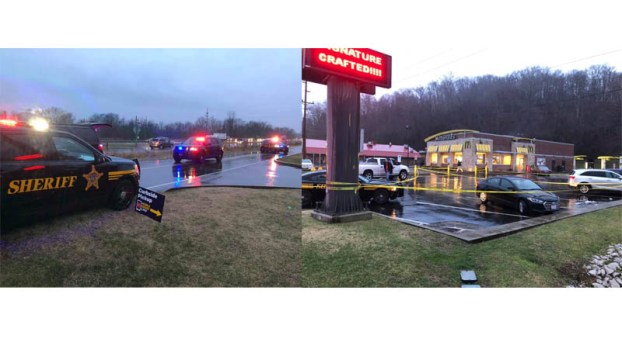 Law enforcement responded to a shooting outside of the South Point McDonald's Wednesday afternoon and blocked off the area.

Believed to be domestic violence incident, victim died at hospital

SOUTH POINT— The Lawrence County Sheriff’s Office responded to a shooting outside of the South Point McDonald’s Wednesday afternoon, which according to Sheriff Jeff Lawless, is believed to be a domestic violence incident.

“About 4:30 this afternoon, we received a call of a possible shooting at the McDonald’s located at 294 County Road 406, which is the Sandusky Road McDonald’s,” Lawless said. “Upon arrival, deputies found an adult male who had been shot at least once and was lying near his vehicle or around a vehicle at the start of the parking lot.”

Lawless added that, through talking with witnesses, they saw a female flee the area after the shooting in a possible white Chevy Impala, which deputies are currently looking for. He said that the victim of the shooting was transported to a local hospital, and later said that he died from multiple gunshot wounds.

“This appears to be a domestic violence situation, and it doesn’t appear that the McDonald’s was targeted in any way as far as the inside,” Lawless said. We don’t believe anything inside of the restaurant had anything to do with this as far as this situation goes.”

Lawless said that he is not releasing the name of the suspect or the victim at this time, but that they believe they know who the female suspect of the shooting is.

“I wanted to give a briefing on the situation to the public, so the public is not panicked if they have a relative or something who works at this McDonald’s and heard that the McDonald’s got shot up or anything like that. That’s not the case,” he said. “This appears to be an isolated incident that occurred in the parking lot between people that possibly knew each other.”

Lawless added that he was glad this was an isolated incident due to the time it occurred in an area near a lot of restaurants and people.

“You’re in a public area, and you have a situation occur like this, that’s just a horrible thing to happen, especially when you’re just trying to enjoy your evening and maybe go out to eat,” he said. “You’re talking 4:30 in the afternoon. A lot of people get off of work at 4 or 5 o’clock and maybe drive through this McDonald’s on their way home.”

Lawless said that detectives are continuing to talk with witnesses of the shooting, and anyone with relative information is advised to come forward.

“I’ll have further information as soon as I can,” Lawless said.