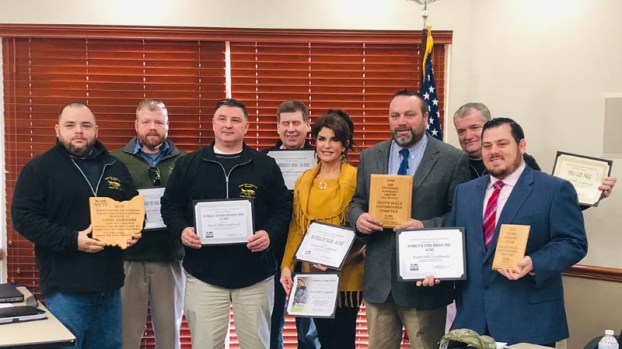 The South Hills Longbeards chapter of the National Wild Turkey Federation (NWTF) was recognized by the Lawrence County Commission on Tuesday for winning awards at the statewide NWTF banquet.

The South Hills Longbeards chapter of the National Wild Turkey Federation (NWTF) recently received 11 awards for the chapter, as well as one individual award, at a state NWTF banquet earlier this month in Waldo.

The chapter was also recognized for its achievements at the Lawrence County Commission meeting on Tuesday, which took place at the Chamber of Commerce.

The South Hills Longbeards chapter is just one of around 70 chapters throughout the state of Ohio, and was the most decorated leaving the banquet on Jan. 12.

The chapter claimed the following awards:

• First place Jake’s Memberships, which are for those 17 years old and younger (145 members)

• Golden Gobbler Award for Banquet, which is awarded to chapters with a 50 percent net to gross profit (58 percent)

• World Slam Award, which is awarded for an improvement of six or more financial categories at the banquet.

“No matter how hard we do our job as volunteers, or how well our leadership is or how hard we work, if it wasn’t for the support of the volunteers, our commissioners, our officeholders and the community to continue to support our events throughout the year, we wouldn’t be as successful as we are,” Larry Pernestti, chapter president, said. “And I want to thank you all for that.”

County Commissoner DeAnna Holliday said that she is proud to have such a successful chapter right here in Lawrence County, and thanked them for everything that they do.

Holliday added that she is a part of the chapter’s Women in the Outdoors program, and teaches the archery class in the fall every year.

The Lawrence County Commission will also present the chapter, and Sammons for winning an individual award, with certificates for their accomplishments as well.

The Ironton Council for the Arts will present a production of “Forever Plaid,” performed by The Paramount Players at 7:30... read more