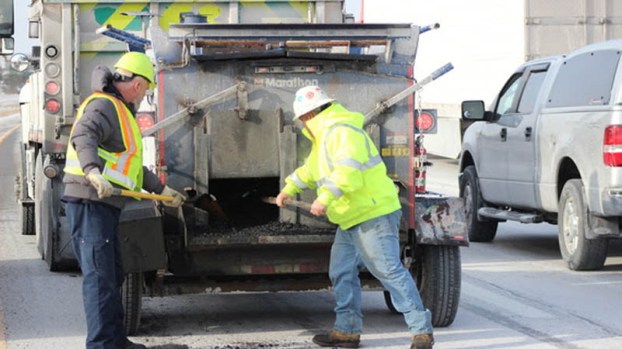 Crews from ODOT are out repairing potholes on the roadways throughout the state. Potholes are prone to form when there are sudden changes in temperature.

Potholes an issue with temperature changes

With temperatures going from sub-zero to highs near 60 in Ohio over the next few days, along with rain and snow mixed in, conditions are prime for the formation of potholes in the roads.

Potholes are a common nuisance, particularly during the winter season, when the freeze/thaw cycle weakens the pavement. They occur when water seeps into cracks in the pavement and then expands as it freezes. When temperatures warm up, the ice melts and the pavement contracts, allowing even more moisture into the freeze and thaw. When traffic is added, the pavement will eventually fail, thus creating a pothole.

Roadways with a high volume of traffic are particularly prone to pothole formation. Drivers should not only be extra alert for potholes over the next several days, but also of Ohio Department of Transportation (ODOT) crews who are working to fill them.

“Our crews have been working around the clock to ensure our roads are as safe as possible,” ODOT Director Jack Marchbanks said. “When they aren’t spending 12 hours in a truck plowing snow, they’re working on the roadway patching potholes.”

So far this winter, ODOT has used 2,574 tons of asphalt to repair potholes, which is increased from 1,892 tons at the same time last year. Crews have spent more than 39,000 hours, equivalent to 70 years, patching potholes this winter.

Potholes on ODOT-maintained roadways, which include state and U.S. routes outside of municipalities and all interstates, can be reported at www.dot.state.oh.us/damagereport/.

Potholes on local roadways should be reported to the agency responsible for their maintenance.