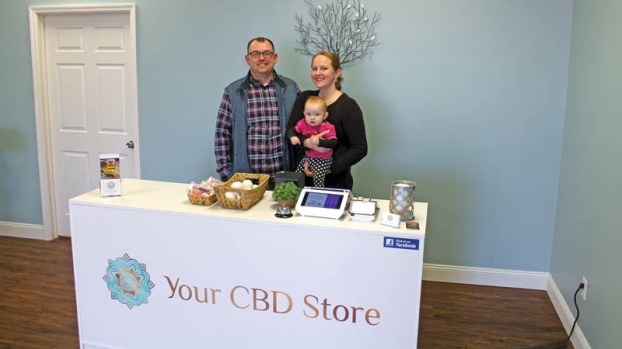 Frank and Catherine Stephens, owners of Your CBD Store in Ashland, Kentucky, along with their daughter, Annie.

‘Your CBD Store’ open in Ashland

ASHLAND — For people looking for a different kind of way to help with ailments, Your CBD Store, specializing in Cannabidiol, better known as CBD, just recently opened in Ashland back in December.

CBD is a compound found in industrial hemp plants that can offer numerous medicinal benefits without the psychoactive effects, or “high” that marijuana is often associated with.

Patients seeking a natural alternative to pharmaceutical medications for chronic conditions  often use it and its popularity has grown over the last 10 years due to emerging research and interest from brands such as BAYER.

“We had our grand opening here in December,” Frank Stephens, one of the owners, along with his wife, Catherine, said. “My wife’s actually a physical therapist and found out CBD was helping people for all types of ailments.”

He added that when they studied CBD and its uses, they wanted to bring it to the people of the Tri-State.

“She had a full-time physical therapy business and she shut that down to be full-time CBD,” Stephens said. “We’ve had hundreds of people come in here and just rave about it and how it helps them.”

He said one example is a woman who suffers from Crohn’s Disease and says CBD is the only thing to give her relief. Stephens said that another woman who frequents the store suffers from very bad arthritis, and could hardly move her hands before using CBD, which she said made her able to move them freely.

“It enables people to taper off prescription medications, to either stop using them completely or begin taking much lower doses,” Stephens said. “Our target market is for people who want relief but not to get high.”

Your CBD Store carries SunMed CBD, which is third-party tested and prides itself on products from hemp plants that “naturally produce a higher amount of CBD, around 18 percent, as well as an array of other beneficial cannabinoids like CBDA, CBG, CBN as well as terpenes that also have medicinal benefits.” In addition, the products have “less than 0.3 percent THC, making it the highest-grade hemp strain grown in the United States.”

Stephens said that some of the ailments that CBD may help with include pain management, anxiety, depression, migraines, nausea, addiction, insomnia and seizures. Products that Your CBD Store has include liquid soluble oil, liquid tinctures, gummies, baking mixes, soft gel caps, E-liquids for vaping, topical creams and oils and treats for pets.

Stephens said that he and Catherine wanted to sell CBD in the Tri-State because people can have access to it from Kentucky, Ohio and West Virginia. In Kentucky, where Your CBD store is located, it is legal to sell CBD products. However, in Ohio it is not due to it being considered marijuana under Ohio law and cannot be sold outside of approved, licensed dispensaries.

Stephens said that another store coming to Barboursville, West Virginia is in the works, with a grand opening for sometime in the early spring.