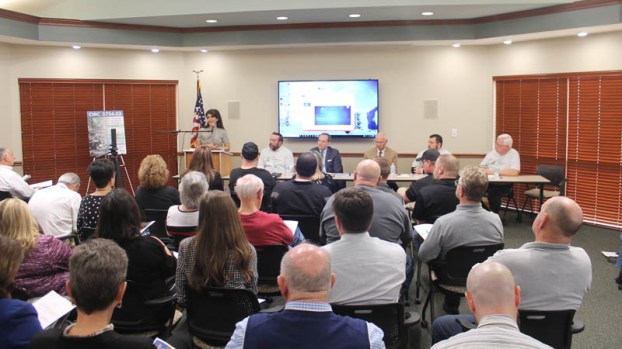 Lawrence County Commissioner DeAnna Holliday speaks about Project First Impression, a new initiative to clean up the county, at its first meeting Thursday afternoon at the Lawrence County Chamber of Commerce.

Initiative formed to clean up county

SOUTH POINT— An initiative to clean up Lawrence County has been on the county commissioners’ minds for the past year and a half, and, after recently hearing from the Ohio EPA that the county is known as the worst in the state of Ohio, as far as litter and illegal dumpsites go, the first meeting of a new project designed to fix the problem took place Thursday afternoon at the chamber of commerce.

Project First Impression, a collaboration between the county commission and the Lawrence-Scioto Solid Waste Management District, is a push to get everyone, including law enforcement, trustees, mayors, officeholders and citizens, working together and doing their part to stop people from illegally dumping and littering throughout the county.

The meeting was standing room only, as almost every elected official, police chief, mayor and office holder was present.

“The reason we’re here today is something that we’ve worked on for the last year and a half; trying to get this county cleaned up,” Commission President Freddie Hayes Jr. said. “We got word from Columbus that we are the trashiest county in the state and we are very tired of that. We want to clean this place up.”

Hayes then introduced fellow commissioner DeAnna Holliday, who he said “has done a lot of the footwork on this project.”

Holliday said that she has a vision for the project to be a place that everyone can come together and work together by communicating and collaborating with one another to accomplish a common goal.

“That’s what this meeting is about today. Forming an alliance and forming this initiative that’s going to meet the needs of the citizens of Lawrence County. In this particular situation, the needs of litter control and environmental issues we have in our county,” she said. “My hope is that as we learn to communicate and work with  one another to utilize each of us as resources to one another.”

She also said that the name Project First Impression is so that the county can make a good first impression on people visiting the county.

“As your county commissioner, I stand as proud of Lawrence County and the people who reside in Lawrence County and many other things as many people here and throughout the county do. The only thing I’m ashamed of is the way that we’re presenting our self,” she said. “That first impression that we’re delivering to people who visit our county and are looking in this area to maybe expand business opportunities, which we know we are starving for; we’re very hungry for economic development. As officeholders, we’re constantly petitioning the state for funding for infrastructure, which leads to further development. We’re also petitioning for people going to work in other areas, like our neighboring states of Kentucky and West Virginia. They have expansions happening and they’re going to be employing people that need places to live. And we want them to live in Lawrence County.”

She added this would also be a full-fledged marketing campaign to raise awareness as well.

Other speakers during the meeting included Lawrence County Municipal Judge Donald Capper and Ironton Municipal Judge Kevin Waldo, who both stated that they would sentence as harsh as possible on people in court for littering or illegally dumping tires and other items.

Capper also had a list of litter and dumping-related offenses for law enforcement that were present, and advised them that there were some cases of misdemeanor levels that mean the same thing as a minor misdemeanor, but carry harsher penalties, and to get offenders with those. He also said that cameras are something that could be very useful near prevalent dumpsites or possibly in places that people can litter from their vehicles but are not easily seen, adding that there are grants and things that can be obtained for that.

Waldo spoke about the issues that his community-service cleanup crew and staff deal with, and said that, within the Ironton city limits, there is an issue with needles and syringes being found daily. Out in the county, there is more of a problem with dumping and trash, though needles are often discovered there as well.

He showed the crowd photos of pickups and sites that his crew cleans up and loads that they have hauled away.

Lawrence-Scioto Solid Waste Management District Director Dan Palmer, whose office was directly working with the Ohio EPA on several cleanup sites last fall and in the past few weeks, said that tires are a huge problem in these dumpsites.

He said that in 2018, the Ohio EPA cleaned up 54 tire dumpsites throughout the state, with 14 in Lawrence County alone, crediting that to the county judges. The Ohio EPA just finished the last of the Lawrence County sites in the past week or so.

One of the worst of those sites was the Crown City Wildlife area, off of Greasy Ridge Road in the area of Chesapeake and is state-owned property, where an estimated 2,500 tires were found and cleaned up, as well as between 1,200 and 1,400 syringes, which was almost the reason the particular project was nearly called off.

Those in attendance of the meeting filled out a form with their name, company or business, input on how they can help clean up the county or what they think needs to be done and contact information.

“As you can tell, this project is in its infancy,” Holliday said. “What we’re looking for today is your input, your collaboration and we are going to be reaching out to you.”