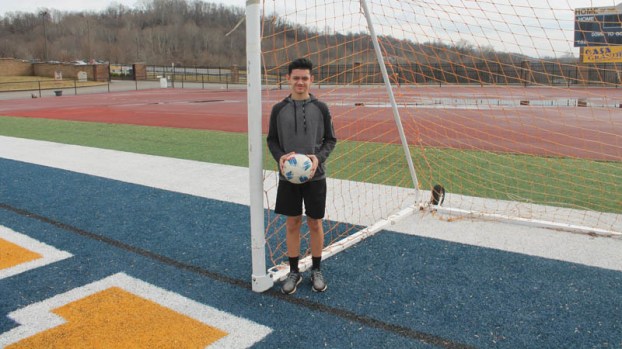 Will spend a week at West Ham United’s academy

SOUTH POINT — Braylon Balandra, 13, an eighth grader at South Point Middle School, has been playing soccer for as long as he can remember.

In April, he will spend a week in London, England at the academy for British Premier League team West Ham United football club after being selected from a national camp.

Academies for teams in the British Premier League are occupied by lower players with hopes to one day become players on the professional team, as well as coaches and trainers.

“I’ve been playing soccer since I was like 3 years old,” he said, adding that his favorite part of the game is scoring goals and winning. “And I’ve loved it ever since.”

West Ham United hosted a regional camp in Hurricane, West Virginia back in June, which he attended, and from there he was selected to go to the club’s national camp in Rome, Georgia, outside of Atlanta, in July.

“After the national camp, he was selected to go West Ham’s main academy in London, England for a week,” Vincent Balandra, Braylon’s dad, said. “He’ll train and play all week there with their trainers and coaches. Everything will be about soccer.”

At the end of the week, he and his dad will get to attend the match between West Ham United and Leicester City.

Balandra, who plays center midfielder, played soccer for South Point Middle School last year as a seventh grader, but not this past fall as an eighth grader. He instead played for his club team, West Virginia Football Club, where he has played for a total of four years, with two years playing for Ohio Premier in Columbus in-between. He also plays for the West Virginia Olympic Development Program (OPD), which is how soccer players can make national teams.

He said he likes watching the British Premier League, often regarded as the best soccer league in the world, but his favorite team is the Columbus Crew of Major League Soccer.

He said he plans on playing soccer for the Pointers next year at the high school, and is looking to win a few championships during his time at South Point High.