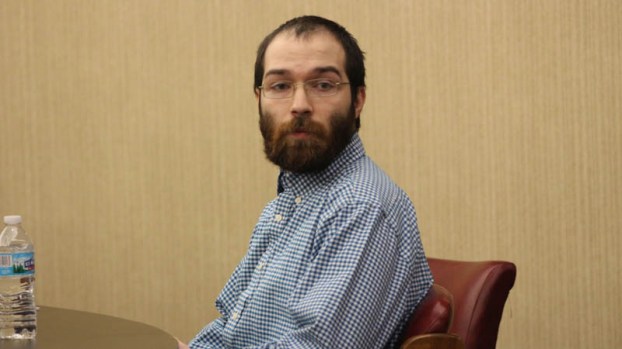 Arron Lawson, 24, of Pedro, suspect in a 2017 quadruple homicide, waived his right to a trial by jury Tuesday in the courtroom of Lawrence County Common Pleas Judge Andy Ballard. He is instead opting to have his case tried to a three-judge panel. (Photo courtesy of Courtney Hessler/ The Herald-Dispatch)

Will now have case heard in front of 3-judge panel

Following almost three weeks of jury selection, with the trial set to begin on Tuesday, Arron Lawson, 24, of Pedro, suspect in a quadruple homicide in 2017, waived his right to a jury trial in the courtroom of Lawrence County Common Pleas Judge Andy Ballard Tuesday, instead opting to have his case tried to a three-judge panel.

“We did not anticipate that he would waive his right to a trial by jury and elect to be tried to a three-judge panel. In fact, we have spent two and a half weeks in jury selection. Because this is a death penalty case, we’ve gone through multiple rounds of jury selection and done what is called individual voir dire, where we’re questioning the jurors individually based upon their knowledge and their belief of the death penalty specifically, as well as any pre-trial publicity that they’ve learned about the case,” Lawrence County Prosecutor Brigham Anderson said. “We spent long days picking this jury and we felt that we had a good jury. We were ready to begin today. Because it’s a capital case, the defendant does have the right to have his case tried to a three-judge panel, which is what he elected to do.”

Lawson informed Ballard that he wished to waive his right to a jury trial, even though it was against the advice of his defense counsel, Kirk McVay, assistant Ohio state public defender, and attorney Gene Meadows.

Lawson said that he was originally leaning toward opting for the three-judge panel instead of a trial by jury, until he consulted with his family and defense counsel on Monday. He said when he saw his mother start to cry, he then chose the trial by jury, only to change his mind again to his original thought on Tuesday.

Lawson is accused in the shooting deaths of husband and wife Donald McGuire, 50, and Tammie L. McGuire, 43, both of 15830 State Route 93, Pedro, Stacey N. Jackson, 25, and her son, Devin Holston, 8, of 15497 State Route 93, where the slayings occurred. Jackson was Lawson’s cousin and he is the nephew of the McGuires.

“He hasn’t pleaded to charges yet, but it is his intention, as I understand it through his counsel, that when he gets to a three-judge panel, it is his intention to enter a plea of guilty. That’s yet to be seen,” Anderson said. “As a prosecutor, my job is to make sure justice is done. And the defendant has rights, and I respect those rights. He chose to exercise all those rights today, so I’m going to be prepared and move on to the next phase and make sure that I do my job and receive justice for these victims.”

Anderson added that Lawson’s decision to waive a trial by jury does not change things very much, and the death penalty will still be sought.

“It doesn’t change anything for me. It may change the way in which I present the case. However, the facts are the facts and it’s our intention to show that Arron Lawson committed these horrific offenses, to show that the aggravating circumstances were present, and we will be requesting the death sentence,” Anderson said. “With the judges, there will be certain stipulations to evidence that they will accept that will not require us to put on evidence. It was our intention to begin trial today with opening statements, testimony and presentation of witnesses and exhibits, and we intended that to last until next Thursday or Friday. So it was going to be a couple of weeks worth of testimony and evidence. That will be shortened, condensed quite a bit, but it all depends on whether or not Mr. Lawson enters a plea of guilty or not guilty. He can still enter a plea of not guilty to the three-judge panel. If he does that, we will be presenting a substantial amount of evidence. If he pleads guilty, at that point, we will present evidence as to the aggravating circumstances.”

Anderson said that the last death penalty trial in Lawrence County was in 2005, when he was an assistant prosecutor to the late JB Collier Jr. After the trial and mitigation phase, the defendant ended up getting life in prison without parole. He added that the last time someone received the death penalty from Lawrence County was in the late 1960s, as the result of a jailbreak.

As far as Lawson’s three-judge panel goes, Ballard will be alongside two other judges who will be appointed by Maureen O’Connor, Chief Justice of the Ohio Supreme Court. Ballard said that since the whole month of February was blocked off for the trial, he was going to try to get the trial going as soon as possible as to fit the time block.

“Typically, the (Ohio) Supreme Court will use what’s known as visiting judges, or retired judges, and they may not have an active docket, which would allow them to step in and we can present this case as early as next week,” Anderson said. “It is my hope that with the busy schedule that we have here in the prosecutor’s office that we’re able to present this case next week to the three-judge panel. At the end of the day, our goal is to receive justice for these victims.”