Georgetown finds just what it was searching for in Duncan 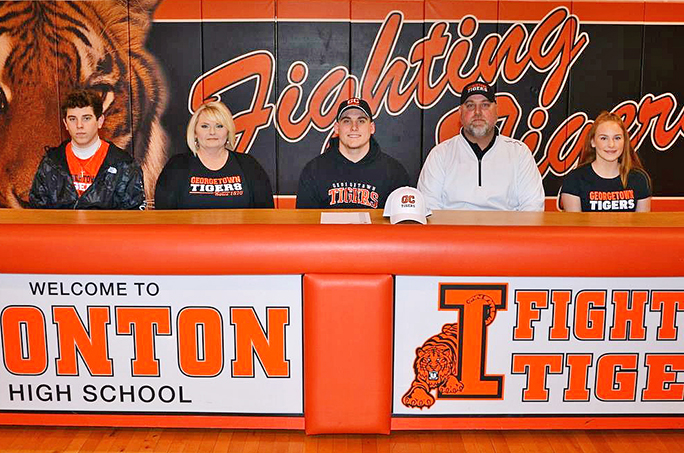 The Georgetown Tigers were looking for Ethan Duncan. As it turned out, he found them.
The seek-and-find process worked out as the two parties finally crossed paths and they were able to sign a deal.
“It’s a funny story. One of my dad’s good friends mentioned Georgetown and I said, ‘I’ll go ahead and take a trip down there.’ I went down there and met with coach (Mike) Caba the guy who recruits this area and met with head coach Bill Cronin and I just hit it off.,” said Duncan.
“They offered me down there. They said they had heard about me before, they looked into me and they had already watched film and couldn’t get hold of anybody. I guess they had the wrong number.”
Duncan made the finding official as he signed a letter-of-intent to play for Georgetown this fall.
Georgetown wasn’t the only school looking to sign Duncan. He also had talks with many other schools that included Ohio University, Wittenberg and Pikeville.
“They are all great schools but I couldn’t turn down Georgetown,” Duncan said of the offer he received.
“It just felt like home the way I was accepted by the coaches. They accepted me for who I was. I know with other schools my size wasn’t in their ballpark, but when I went to Georgetown they loved me for who I was. That’s a team that wants me so I’m going to play for them.”
The 6-foot, 220-pound Duncan was named to the Division V All-Ohio first team after being a third team section the previous year.
Duncan worked his way into the starting lineup as a freshman and was part of three Ironton teams to qualify for the state players. He averaged 10 tackles a game this past season and had an interception against Ashland to his credit as he was named the Southeast District Co-Defensive Player of the Year.
Georgetown is a traditional power among the NAIA ranks. The program has three national championships, five runners-up and 19 conference championships.
Duncan’s size wasn’t the prototype some colleges wanted, but Georgetown had no problem with his size and skill set.
“They said my size is fine. They like the way I work and they can tell I work. That’s the big thing with them. They like my size. They like me for who I am.,” said Duncan who is expected to play inside linebacker.
The Tigers had several reasons for wanting Duncan. Along with his work ethic, Duncan was known for his ability to go sideline to sideline.
Plus, Duncan has never shied away from contact.
“Defense is my favorite. It’s my forte. I enjoy playing it because you’re always making the big hits. It’s just what really drives me, making the big hits and wowing the crowd. I like the physicality of defense. I’ve just never been that kind of guy who needs the ball or scores touchdowns,” said Duncan.
At Ironton, Duncan was part of two Ohio Valley Conference championships and three playoff appearances. He also found his way into the starting lineup as a freshman.
“A lot of my progression was just the experience on the field. I learned a lot of knowledge throughout the four years on the field. That’s what really helped me was the knowledge of the game,” he said.
As for his transition to the next level, Duncan knows it will be much more difficult, but that hasn’t defused his ambitions.
“I want to go in and start as a freshman,” said Duncan. “I know it’s going to be a big feat to do that, but all it takes it a lot of hard work this summer and putting on a little pounds and strength and impressing people down there.”
Duncan plans to major in nursing.