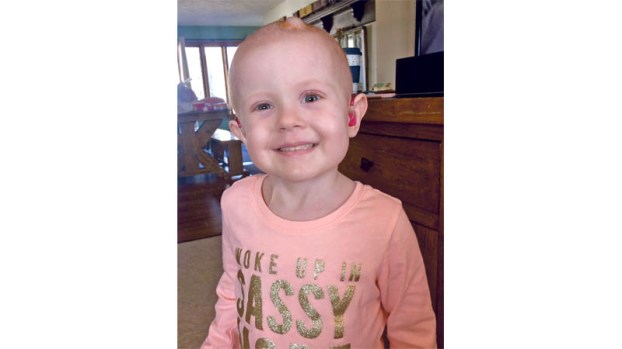 Heidi Adams, the four-year-old daughter of Boyd and Megan Adams, of Proctorville, continues to recover from Pineoblastomas, a rare aggressive brain cancer. There will be a fundraising dinner and music Sunday at New Hope United Methodist Church in Proctorville to raise money to help defray medical expenses.

The New Hope United Methodist Church in Proctorville will be having a “Hope-4-Heidi” fundraising event on Sunday, Feb. 24 from noon- 3 p.m. with a spaghetti dinner and music by local artists. The cost of the meal is by donation.

The event is to raise funds to help Heidi Adams, the four-year-old daughter of Boyd and Megan Adams, who has lived over half of her life battling brain cancer.

During the summer of 2017, her parents noticed that she was losing her balance and complaining of headaches. Doctors diagnosed the disease in August 2017 after Heidi underwent an MRI. According to medical publications, the cancer, Pineoblastoma, is a very rare, aggressive type of malignant cancer originating in the brain’s pineal gland cells. More common in children than adults, pineal-region lesions account for less than 0.1 percent of all intra-cranial tumors.

At the age of two, Heidi began her fight against cancer at Cabell Huntington Hospital with successful surgery that removed most of the tumor. After surgery, Heidi was flown to Nationwide Children’s Hospital in Columbus and received a series of procedures, including stem cell replacement treatments. Heidi celebrated a period of remission from January 2018 until May 2018. According to Megan Adams, doctors found growth again during a post treatment.

“Our world was turned upside down when we heard the tumor had grown again,” said Megan. Heidi re-started the treatments in July 2018, and, after a few more months of treatments, her MRI was clear in December 2018. Doctors then referred Heidi to the Memorial Sloan Kettering Cancer Center located in New York, New York for additional medical services.

Boyd Adams, Heidi’s father recounted the trip, “We had to take Heidi to New York to start liquid radiation treatments. It was hard being so far from home and family for three weeks. She received her first treatments during the stay, but she has to go back for another three weeks to get more,” he said.

The church, located at 111 Township Road 1130, just north of Proctorville off of County Road 775, will have a spaghetti dinner and there will be performances by local musicians including the ThunderTones, 5$Red, River Magic Chorus and Sweet Adelines International. Other local groups and individuals will also perform during the event.

The cost of the meal is by donation.

The Adams family appreciates all the support the community has shown the past two years.

“Community support has been amazing,” said Megan. “Businesses have organized fundraisers, friends arranged a 5K event, and a friend helped set up a GoFundMe account that people can help through,” she said. Boyd described how wonderful it has been to see the community behind Heidi in her journey.

“Our small community of Proctorville has been overwhelmingly supportive, and you can feel the love they have for Heidi. This fundraiser at New Hope United Methodist Church means so much to our family. It will help pay bills while we are in New York,” he said.

Doors for “Love and War” open at 5 p.m. The Ro-Na Theater in Ironton will be turned into a wrestling... read more