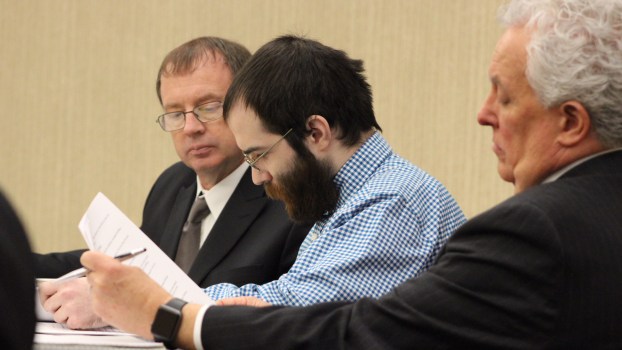 Suspected quadruple homicide killer Arron Lawson, 24, pleaded guilty to all 13 of his charges on the first day of trial in front of a three-judge panel Thursday in the courtroom of Lawrence County Common Pleas Judge Andy Ballard. Pictured with Lawson are his attorneys Kirk McVay, assistant state public defender, right, and attorney Gene Meadows. (Photo courtesy of Courtney Hessler/The Herald-Dispatch)

The suspect in a 2017 quadruple murder pleaded guilty to all 13 charges and accompanying specifications against him on the first day of his trial.

Arron Lawson, 24, of Pedro, made the guilty plea Thursday in front of a three-judge panel in the courtroom of Lawrence County Common Pleas Judge Andy Ballard.

After the guilty plea, the judges heard opening statements in regards to mitigation in the case and the penalty that Lawson may receive.

Ballard said that the aggravated murder unclassified felonies do not carry a maximum of the death penalty, but if he was found to be guilty to one or any of the specifications with them, the death penalty is still on the table.

Lawrence County Prosecutor Brigham Anderson opened the state’s case by stating that there is no doubt Lawson is the only one involved in the murders and then proceeded to tell the judges what the state believes occurred on Oct. 11, 2017.

Anderson said that Lawson was armed with a 20-gauge shotgun and a backpack with additional supplies, including additional ammunition, knives, rope, beard cutters for attempting to change his appearance, and more.

Anderson added that the whole thing began with a sexual relationship Lawson was having with Stacey Holston, and when she ended it, it sent him into a “blind anger.”

Anderson said that sometime the day before, on Oct. 10, 2017, Lawson allegedly had gone to the residence and used a Power Rangers book to wedge a window open in an extra bedroom used for storage so that he was able to get into the home.

The next morning, Lawson allegedly made his way back into the residence using the open window until Devin Holston got on the bus to go to Rock Hill Elementary School. Lawson then allegedly proceeded to shoot Stacey Holston three times in the chest when she came out of the bathroom, then placed her body on Devin’s bed, undressed her and raped her. Another child, 2-year-old Braxton, was left in the master bedroom unharmed, with Anderson adding that Lawson took care of him throughout the day, including feeding him Vienna sausages and changing his diaper.

At around 9:30 a.m., Lawson allegedly took Stacey’s cell phone and called Rock Hill Elementary, stating that he was Todd Holston, Devin’s father, and informing the secretary that Devin was no longer to go to his grandparents’ house, but to get on the bus and go home like he normally does.

Anderson added that, at that point, Devin began to ask Lawson questions, such as where his mom and dad are. Lawson then told Devin that they could play a Play Station 3 game system that he had brought over to the house, before fatally shooting him twice.

Todd Holston, a construction worker, was out of town working on a project in Maysville, Kentucky. Anderson said, and Todd later confirmed during testimony, that Todd awoke early in the morning for work, sometime between 4-4:30 a.m., and met his boss at Tim Horton’s in Portsmouth before the pair drove to Maysville together to save on gas.

Todd Holston testified that he normally talked to his wife Stacey several times throughout the day during his breaks, but was not able to make contact or get a response from her at all that day, which worried him.

Todd clocked out that day at 5:30 p.m. before he and his boss drove back to Portsmouth and then he drove back home to Pedro in his own vehicle. Still not able to contact Stacey, he called Tammie McGuire, Stacey’s mother, to see if she could go check on her at the house to see if everything was OK.

Anderson said that Tammie calls Todd back to let him know that something isn’t right at the home and she couldn’t get inside the house, at which point Todd told her it was OK to break in. While on the phone with Todd, he heard Tammie say “oh my God,” before a loud noise followed by silence. Todd then called Tammie’s husband, Donald McGuire, to go to the residence, where he was met by Lawson, who fatally shot him twice.

Lawson then moved Tammie’s body to the laundry room, and moved Donald’s body inside of Devin’s room where Stacey’s body also was. Moments after Donald was killed, Todd arrived back at the residence, but Lawson was out of ammo so he began stabbing Todd in an attempt to kill him. Todd Holston said that Lawson told him there had been some recent break-ins in the area, and that he thought he was breaking into the house.

Bloody and with multiple stab wounds, Todd was able to fight Lawson off before kicking him out of the home, locking the door and taking Braxton with him down the road near the home of the McGuire’s and calling 911.

Todd then discovered Tammie’s body, and then found the bodies of Stacey and Donald, but could not find Devin. Investigators later found the boy’s body hidden behind a dresser in his room.
Meanwhile, Lawson fled the home in the McGuire’s truck and drove to the South Point Walmart.

He used stolen money to purchase two shirts, socks and jeans, before going out to the back of the truck and changing. He then went back into the Walmart and purchased a DVD player and two DVDs before driving a little further down U.S. 52 to the South Point Taco Bell to get something to eat.

Anderson said that around 10:30 p.m., Lawson allegedly drove to a friend’s house in an attempt to purchase marijuana, where he spent about 45 minutes. Undercover officers from the Lawrence Drug and Major Crimes Task Force later spotted the stolen vehicle, noticed Lawson was driving it, and followed him until he pulled into a residence. Lawson then fled again before he crashed the truck and then fled on foot into the woods setting off a two-day manhunt by numerous law enforcement agencies.

“There is no doubt that the defendant is guilty to all four counts of aggravated murder, all of the specifications, and all of the other charges,” Anderson said. “At the conclusion of this, there will be no doubt that he completed each and every count that he pleaded to.”

Todd Holston said that his family had lived in that residence for about six months, and Lawson was over all the time since he lived in a home next to the McGuires down the road. He added that he had hung out with Lawson numerous times without incident while he was over at their house in those months before the killings, and often overstayed his welcome. He said that many times, he would inform Lawson that he would have to leave because the Holstons were not able to have much family time, which often angered Lawson. He added that before the family had lived down the street from Lawson and the McGuires, he never spent any time with Lawson prior.

Assistant state public defender Kirk McVay, who is representing Lawson in the case along with attorney Gene Meadows, opened by saying that he is not disputing the events that occurred, but that the death penalty being sought should not be the verdict due to Lawson indicating and demonstrating that he is remorseful.

McVay said that Lawson’s upbringing was less than ideal, stating that he dealt with different kinds of abuse from his father and step- and half-siblings, and there was a history of alcohol and drug abuse in his family. McVay said that Lawson had no prior record and that all of these things that have happened to him amounted to a “dysfunctional upbringing.” McVay added that Lawson is the third child born to his mother, with two before him and two after him, all having different fathers, and that his siblings and father often abused him, causing several instances where he had to get medical attention.

“He was left with a sense of abandonment by his mother, who was incapable of taking care of him, and his dad, who wouldn’t take care of him,” McVay said of Lawson. “He always felt abandoned, unappreciated and taken advantage of.”

Those who took the stand on the first day included Todd Holston, sheriff’s deputy Scott Hatfield, who was at the scene of the murders, Terri Stamper, secretary at Rock Hill Elementary School who took the call from Lawson pretending to be Todd, and Shane Hanshaw, special agent with the Ohio Bureau of Criminal Investigation.

Day two of the trial is set to resume at 9 a.m. Friday.

Columbus Zoo animals shown at elementary school BURLINGTON— The students at Burlington Elementary were in for a treat on Wednesday,... read more