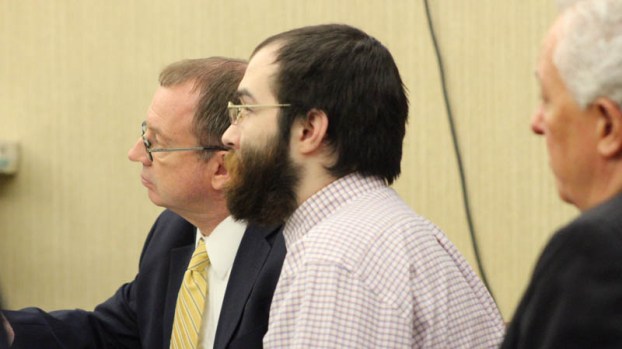 Arron Lawson, 24, convicted 2017 quadruple homicide killer, was sentenced to death for each of the four aggravated murder charges against him. (Photo courtesy of Courtney Hessler/The Herald-Dispatch)

Received 59 years, 6 months in prison for other charges

Ballard, who sat alongside retired Cuyahoga County Common Pleas Judge Janet Burnside and retired Brown County General/Domestic Relations Judge R. Alan Corbin on the panel, stated that the aggravating circumstances outweighed the mitigating factors in the case, which resulted in the death penalty.

“As you know, this was a tragic situation for this family, and had multiple deaths under horrible circumstances,” Lawrence County Prosecutor Brigham Anderson said following the sentencing. “We are satisfied with the verdict. We’re happy with the sentence that the court imposed, but it’s a tragic situation. There are no winners. We believed that justice required a sentence of death and that’s what the court agreed with.”

Anderson said that you never know what the verdict of a case will be when asked if he had any doubts on receiving the death penalty verdict that was sought.

“As an attorney and working towards that goal, you never really know what the fact finders are thinking. In this case, it was three judges. Judges typically follow the law, and the law in Ohio says that if the aggravating circumstances outweigh the mitigating factors, they shall impose a penalty of death,” he said. “And I think the evidence that you’ve seen over the last six days and the evidence that those three judges were able to witness gave them the opportunity to say that those aggravating circumstances certainly outweighed any mitigating factor that they may have presented, and that death was the appropriate sentence.”

Anderson said that because this is a death penalty case, it would be automatically appealed to the Ohio Supreme Court.

“Normally, Ohio has intermediate appellate courts and criminal cases would be appealed to one of those,” he said. “In this case, it goes directly to the Ohio Supreme Court, and the court in Lawrence County has 14 days to issue a written decision to the Ohio Supreme Court, at which time the Ohio Supreme Court will do what’s called a de novo review, where they actually review all of the evidence and they make sure that the three-judge panel made the right calls as it relates to the aggravating circumstances and mitigating factors. I believe that will take some time.”

While no one spoke to Lawson following the sentencing, Anderson added that the victims’ family was satisfied with the verdict.

“They believed that justice was served. As hard as it was on them at the time, as hard as it was on them to be here and witness the evidence, they believed that this was a just verdict,” he said. “The facts of this case were horrendous. When it comes to four murders at one time, one of them being a child, its just heart wrenching. It’s heart wrenching for anyone. It’s been upsetting from the beginning, but again, it’s my job that two things happen; the truth and justice. And I think both were shown in court this week.”

One of the stranger parts of Thursday’s proceedings came following the reading of the verdict, where Lawson stated that he in fact voted for Prosecutor Brigham Anderson, as well as Judge Andy Ballard, and said that he thought they did a great job. He also added that he was thankful to all of the attorneys and the panel of judges for showing him respect throughout the proceedings.

Ohio State Assistant Public Defender Kirk McVay, who was representing Lawson in the case along with attorney Gene Meadows, said that these cases are always difficult for him.

“These are always hard for me. We fight against sometimes terrible odds in order to, in affect, save a person’s life,” McVay said. “You make your arguments, and they are either accepted or… it’s just hard to know someone’s life was placed in my hands and I was unable to succeed.”

As far as the cost goes for the proceedings over the past week, Anderson said he didn’t have an exact figure, but that it was in fact expensive.

“It’s been expensive and the defendant has what’s called super due process, so he was afforded doctors, two lawyers, investigators,” he said. “But that’s what he should get afforded. He should get all that opportunity and, as expensive as it is, that’s what justice requires and I think some things are more important than money.”

The last case where someone was actually sentenced to the death penalty in Lawrence County took place in the 1960s as the result of a jailbreak. Another death penalty case was tried in the county in 2005, however, the defendant in that case did not get sentenced to death.

Anderson added that even through this tragic situation, there is something to take out of it.

“As tragic as it is, what you can take away is that the system works. It takes time, it’s frustrating at times, but our system of justice works,” he said. “It’s what separates our country from almost every other country is the fact that we have innocent until proven guilty and it’s the state’s burden to prove that. I believe we did prove it in this case, and the judges felt that way as well.”