Stephens sworn in for third term as auditor 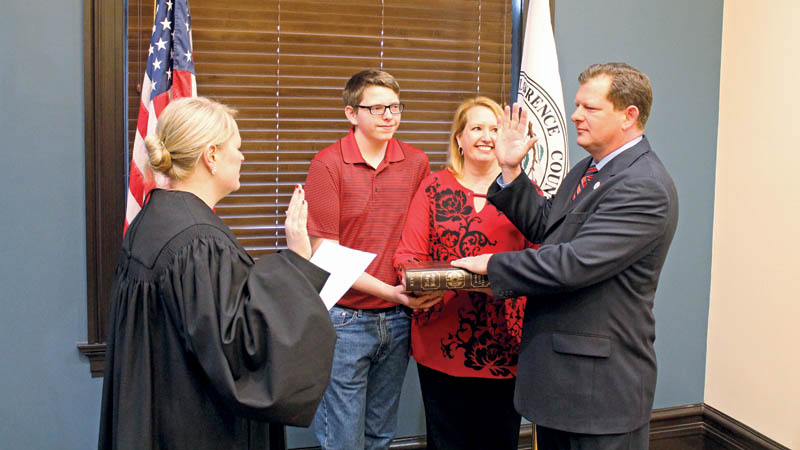 Lawrence County Auditor Jason Stephens, right, gets sworn in for his third term in the position by Lawrence County Common Pleas Judge Christen Finley on Monday. Alongside Stephens are his wife, Juli, and their son, Jackson.

Lawrence County Auditor Jason Stephens was sworn in for the third time in his position Monday morning in the auditor’s office at the courthouse.

“I’m extremely grateful for the opportunity to serve Lawrence County,” Stephens said. “We’re looking forward to the future and want to continue a professional, efficient and customer-friendly auditor’s office.”

This marks the beginning of Stephens’ third four-year term serving in the position, which he said he is looking forward to.

“Getting sworn in is a good chance to refresh, reset and move forward,” he said. “It’s an exciting day and, even though it’s my third time getting sworn in as auditor, it doesn’t get old. It’s a humbling feeling to take office after getting elected by the people.”

In total, Stephens said this was his sixth time getting sworn in after previously being elected as a county commissioner three times before becoming auditor.

Following Stephens’ swearing in, he administered a group swearing in to all of his deputy auditors in his office, including Lawrence County Chief Deputy Auditor Chris Kline, who has been in the office for more than 30 years.

Guests at the ceremony were also treated to coffee and cookies.