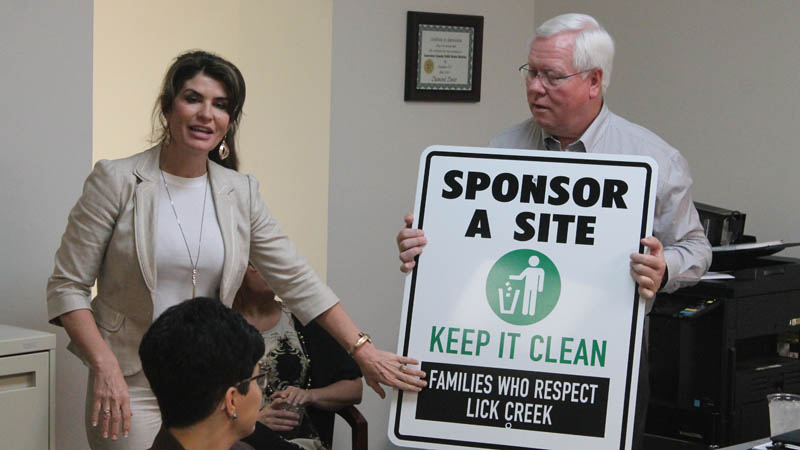 Lawrence County Commissioner DeAnna Holliday and Lawrence-Scioto Solid Waste Management District Director Dan Palmer display a sign that will soon be placed on Lick Creek, after families on the road committed to cleaning up two miles of roadway at least three or four times a year.

A recent meeting of Project First Impression, a new cleanup initiative in Lawrence County, took place at the Lawrence-Scioto Solid Waste Management District office in Ironton Tuesday, where progress and future plans for the program were discussed.

Led by Lawrence County Commissioner DeAnna Holliday and the rest of the commission, as well as the solid waste district, Project First Impression aims to clean up Lawrence County and eliminate illegal dumping throughout the county.

“We want to break this down into smaller task groups, each led by a community member or an entity that could impact that group. I’ve recently talked to both of the municipal courts, the probation departments and the STAR folks about getting ahead of the mowing crews and then coming back behind them to clean up litter out on the roads,” Holliday said. “Ultimately, at the end of the day, we want to have a cleaner environment out on our roadways.”

Holliday added that this would also give groups like that the chance to collaborate with one another in coming up with new ideas and more efficient ways to clean up.

“We have to be collaborating with those on the front lines dealing with those issues on a daily basis,” she said. “We’re thankful that our judges and prosecutor are on board with this. That’s a key component to its success.”

Palmer urged them to crack down on those who are littering and illegally transporting tires to dumpsites.

“We need your cooperation with this; the sheriff’s deputies, state deputies, the village police departments,” Palmer said. “We need to address these tires that are prevalent throughout our county. There are tires everywhere.”

Palmer stated that the Ohio EPA conducted 54 tire cleanups throughout the state of Ohio last year and into this year, with Lawrence County being the recipient of 14 of those. He said the worst case was at the Crown City Wildlife Area, off Greasy Ridge Road in the Chesapeake area, where an estimated 2,500 tires were hauled off, and between 1,200 and 1,400 needles were found, This was almost a reason the Ohio EPA nearly called off the project.

“If any law enforcement sees anyone transporting more than 10 tires late at night, pull them over and ask to see their certificate from the Ohio EPA to legally transport that many tires,” Palmer said. “If they don’t have it, they can be taken to court. There is a fine of anywhere from $10,000 to $25,000 and they can spend from two to four years in prison for the offense. There’s an annual fee of $300 with the Ohio EPA to register to transport more than 10 tires, but at least they’d be doing it right.”

Lawrence County Municipal Court Judge Donald Capper also urged law enforcement to charge those caught littering with misdemeanors of the third-degree, instead of a minor misdemeanor that falls under a traffic violation.

“When someone is hit with a minor misdemeanor, they get no points on their license, no community service. The only thing I can give them is a fine,” Capper said. “With the M-3, I’m able to give community service and a fine. When people get hit with harsher penalties, they’re not as likely to commit the offense again.”

Holliday also talked about plans to get litter control started in children through education at school, which she added would most likely start next school year, but there would be a kickoff sometime at the end of this school year.

“The most important component of this is the educational component,” she said. “We need to deliver this into our classrooms and our adult programs as well.”

She said that she has met with Carla Salyers, president of the Lawrence County Educational Service Center, and Tomi Blankenship from Collins Career Technical Center, about forming some student-led initiatives, and has plans to meet with each of the individual school district boards as well.

In addition, Holliday said she wanted to start a professional group for Project First Impression as well, where interested businesses could take part in efforts.

One of those interested is Cathie Gue, community outreach coordinator at Schneider-Hall Funeral Home and sister of the late Billie Smith, who led the group Operation TLC (Tidy Up Lawrence County). Palmer read a letter he received from Gue that said she and the funeral home are on board with the cleanup effort and would be willing to participate. Operation TLC aimed to do the same thing, but disbanded following the passing of Smith.

Holliday and Palmer then showed the group a sign that will soon be placed on Lick Creek, where the family of Tom McCallister and other families on the road committed to clean up two miles of the roadway.

“They started the other day, and are taking on two miles of that road. From U.S. 52 to his house,” Palmer said. “The other day, they went out and collected 19 bags of litter in that span and plan to go out again soon.”

The sign says “Sponsor a Site” at the top, a logo of a figure throwing out trash, “Keep it clean” underneath and “Families who respect Lick Creek” at the bottom.

“If anyone is interested in getting a sign, we just need your commitment that you’ll be cleaning the area at least three to four times a year,” Palmer said. “All you have to do is call and tell us your group, the leader and the area that you plan on cleaning and we’ll be able to get you a sign.”

Palmer said that the bottom portion of the sign could say the name of the group that plans on doing the cleaning.

“We hope to have the sign up on Lick Creek sometime next week,” Palmer said.

Anyone interested in cleaning a road or area of the county and receiving a sign can call the Lawrence-Scioto Solid Waste District Office at 740-532-1231.