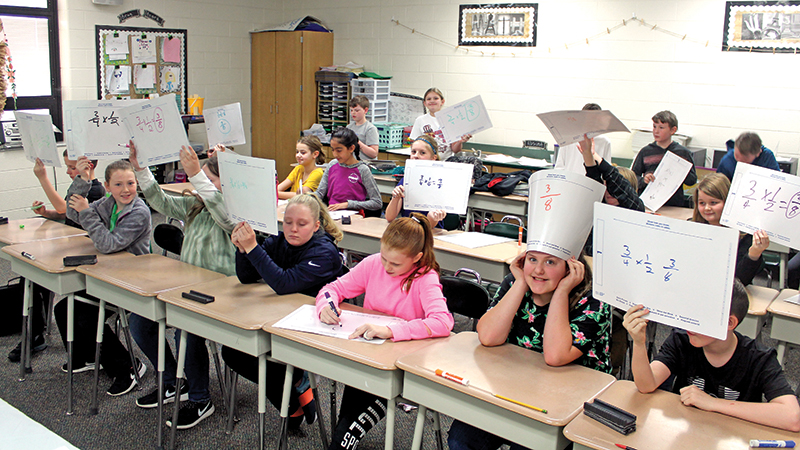 ROME TOWNSHIP — The fifth graders at Fairland West Elementary School celebrated Pi Day in math teacher Heather Black’s class on Thursday, solving math problems and playing with the “Pie Face” game, where chances are taken to potentially get a whipped cream pie in the face.

“They don’t actually have to learn pi in the fifth grade, so I’m just using it as a learning tool and giving them math problems to solve as practice for upcoming state testing,” Black said. “If 80 percent of the class gets the answer right, I have to get pied in the face. Or, if a student volunteers they can get pied.”

Black had five fifth grade math classes throughout the day, with each student in the winning classroom receiving a small apple pie at the end of the day.

In addition, the fifth graders also conducted a Pi Day T-shirt design contest in the days leading up to Thursday.

The winner of the contest was Lennox Holbrook, whose T-shirt featured an airplane leaving behind 3.14 in the clouds for Pi Day.

“I picked Lennox’s design because I thought it was really original and unique,” Black said. “And then I had the design printed out on T-shirts for Lennox and the teachers to wear on Thursday.”

Holbrook said that he came up with the design because he likes airplanes, and didn’t know he was the winner of the contest until he got to school on Thursday.

“I surprised him with these shirts just this morning,” Black said. “I got them printed at Tri-State Sportswear right here in Proctorville, and Lennox’s grandma owns the store.”