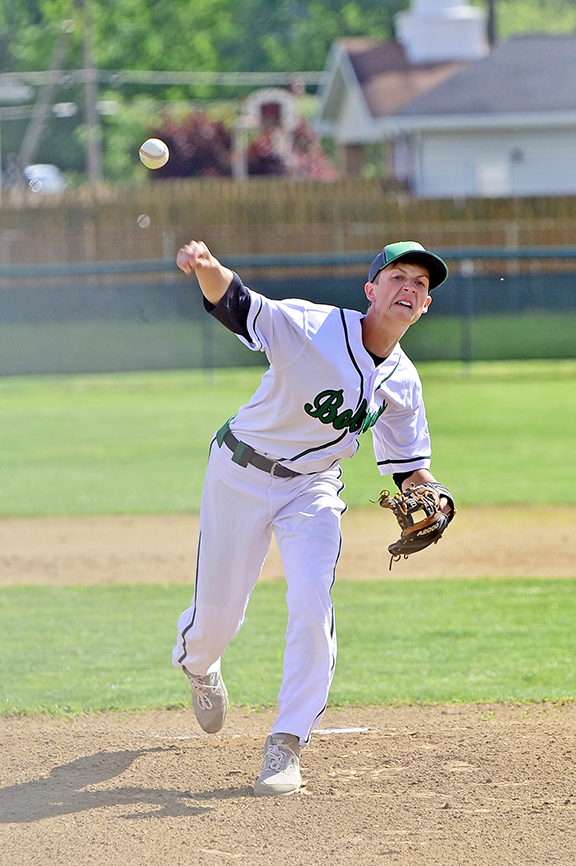 FRANKLIN FURNACE — The Green Bobcats may not have been their usual selves, but Tanner Kimbler didn’t change.
Kimbler struck out 13 and threw a two-hitter as the Bobcats edged the Manchester Greyhounds 4-2 on Tuesday to win the Division IV sectional tournament.
“We weren’t real crisp, but we survived and advanced and that’s what tournament ball is about. We did enough to win,” said Green coach Dan McDavid.
“Tanner threw really well. All he does is throws strikes and not walk batters. Mason Barber had a big game and that was big for us. Their pitcher a nice job. He kept us off-balance.”
The Bobcats had nine hits with Barber going 2-3 with three runs batted in. Eli Webb was 2-4.
Manchester pitcher Logan Bell struck out five, walked one and three runs were earned.
Green (21-3) took a 2-0 lead in the first inning.
Eli Webb singled, stole second and Kimbler singled only to have Webb thrown out at home.
Tayte Carver was hit by a pitch and Levi Singleton walked to load the bases.
Mason Barber followed with a clutch two-run single.
Manchester got a run back in the second with two outs.
Cade Colvin was safe at second after a throwing error and Kaleb Henschen got an RBI single.
Green got the run back in the fourth when Mason Barber was safe at second after a throwing error and he scored on Trevor Darnell’s base hit.
The lead went to 4-1 in the fifth inning.
Carver got a leadoff single, Bryce Ponn was safe on an error and Singleton sacrificed the runners up a base. Barber drove in his third run with a base hit.
The Greyhounds got a run in the seventh and were threatening for more.
Nathan Rife walked to lead off the inning and an out later Jackson Poole was safe on a fielder’s choice with Rife thrown out at third.
Jacob Calvert reached on an error and Colvin singled in a run.
But Kimbler got the next batter to ground out to shortstop and end the game.
Green plays Southern at 7 p.m. next Tuesday in the district semifinals at Veterans Memorial Stadium in Chillicothe.
Manchester 010 000 1 = 2 2 4
Green 200 110 x = 4 9 2
Logan Bell and Logan Reed. Tanner Kimbler and Mason Barber. W-Kimbler (ER-0, K-13, BB-1). L-Bell (K-5, BB-1, ER-3). Hitting-MHS: Cade Colvin 1-3, Kaleb Henschen 1-3; Green: Eli Webb 2-4, Tanner Kimbler 1-4, Tayte Carver 2-3, Mason Barber 2-3 3-rbi, Trevor Darnell 1-3, Ethan Carpenter 1-2.