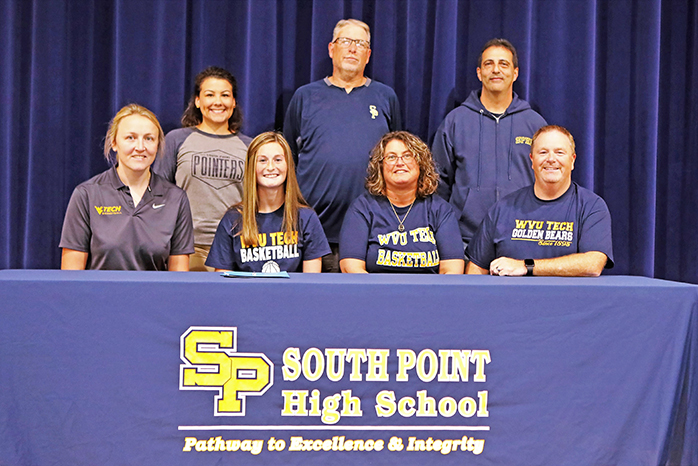 SOUTH POINT — For Emilee Whitt, it was love at first dribble.
There were plenty of options for Whitt to choose from when looking for a college basketball program to put in her future. But the choice of West Virginia Tech came rather easy.
“As soon as I stepped on the campus I knew that’s where I wanted to live the next four years,” said Whitt. “I fell in love with the coaches and the teammates. It just felt like home. It’s growing a lot, too.”
South Point’s 5-foot-7 senior point guard signed a letter-of-intent to play basketball for the West Virginia Tech Golden Bears on Friday.
The list of choices for Whitt were Capital University, Ohio Dominican, Ohio Wesleyan, Ohio Christian, Ursuline and Cedarville University.
The Golden Bears — an NAIA program — were 24-10 last season and 16-1 in the River States Conference.
Head coach Anna Kowalska said it was an easy choice for her as well when it came to signing Whitt.
“I’m very excited about her. The first time I saw her play last year I said, ‘we need to have her.’ She’s going to be a really good point guard for us,” said Kowalska. “She can do everything. She can shoot, she can penetrate, she’s aggressive, she plays hard, she’s very athletic, she’s long. We need someone like that for the following year.”
The Golden Bears have junior Kathylee Pinock Branford to play point guard this season whom Kowalska expects to help mentor Whitt when she arrives on campus next year.
“We’ve have had pretty good success so far at Tech. We got picked first in the league (this season). We need to recruit good players to keep that intensity. She would be a perfect fit for our program,” said Kowalska.
“Kathylee will be a good point guard for us and she already said she wants to take (Whitt) and teach her what she needs to do and push her and she’ll get better and will have minutes and eventually (take over the position).”
Whitt also plays soccer and runs track. Although she likes all the sports, she admitted basketball has always been her favorite.
“I grew up around sports. It’s just what I did,” said Whitt who has two older brothers, Alex and Jared.
“I’m like basketball because I’m better at it and I spend a lot of time in the gym. I do a lot of work in the gym and even the weight room. I definitely need to get a lot stronger and just mentally be prepared because I’m going to be practicing a lot. I’ll be on the road a lot more.”
Whitt averaged 12 points and 3.5 assists last season and was Division III second team Southeast All-District and honorable mention All-Ohio.
She is expected to be a point guard for the Golden Bears.
“Mainly I’m going to be a point guard, but if I have to float to shooting guard I will, but I’m mainly going to be a point guard,” said Whitt.
“I’ve played it all my life since I was a little kid. Their style is just quick, fast, which I like that. I like running the floor up and down.”
Whitt said gave a lot of credit to her parents Chris and Lora for the basketball success she has enjoyed.
“They knew what was best for me from the start,” said Whitt. “I got super serious about basketball going into the fifth grade. I just worked towards it and I played a lot of travel basketball. I traveled a lot.”
Whitt plans to major in forensic investigation and land a job with the FBI.

Trojans rally past Dragons in OVC, 20-14

Jim Walker jim.walker@irontontribune.com PROCTORVILLE — It was supposed to be a matchup between Portsmouth Trojans running back Talyn Parker and... read more