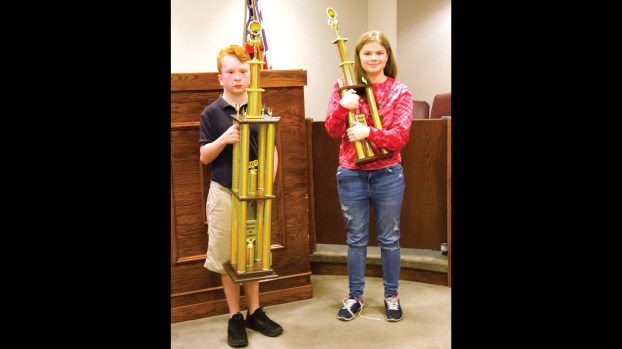 It took a little longer than usual to get there, but Lawrence County has a new spelling champion for 2019.

School spelling champions from 16 schools took part in the event, organized by the Lawrence County Educational Services Center on Wednesday.

After a little over an hour, it was down to two spellers, Sawyer Blackburn, of St. Lawrence, and Addisyn Wood, of Dawson-Bryant Middle.

Blackburn misspelled the word “cognition,” which then put Wood up.

She successfully spelled “gazelle,” but, in order to win the bee, had to get one more word correct.

She given the word “antagonize,” but misspelled it, sending it back to Blackburn for a second chance.

He then successfully spelled “boutique,” winning the bee.

It was the second year getting one of the top two trophies for Blackburn, a sixth grader and the son of Kelli and Mark Blackburn. He came in second place in last year’s event.

It was his third time competing in the county bee, for which he had to win his school bee to take part.

With the bee open to fourth through eight grades, he has two more years in which he can take part.

“It feels good,” he said of taking the top spot.

Second place winner Wood, an eighth grader, had described herself as “the most nervous person up here” when introduced and provided a laugh for the crowd when she ended up having to spell the word “pressure.”

“There’s a lot of that right now,” she joked.

She said it was her second trip to county, having come in 15th in a previous year.

Wood said she hopes to take part in the regional bee, which she and all the school winners are eligible to do if they qualify through an online test in January.

That event takes place at Ohio University in Athens in March.

Last year, Lawrence County sent five students to compete in the event, a record for the area, and last year’s county champion, Hannah McKenzie, of South Point, came in second place out of 45 spellers as an eighth grader.

Winners of the regional bee are then eligible to apply for the Scripps National Bee, which takes place in Washington, D.C. later in the spring.

The last student from the county to win at regional and advance to nationals was Felicity Jenkins, of Symmes Valley, who did so as a sixth grader in 2010.

Rounding out the top five in the county bee were London Kerns, of Chesapeake Middle, Parker Allen, of South Point Middle and Haley Shimer, of Ironton Middle.

The ESC’s next county event is the middle school Quiz Bowl competition, set for today at Ohio University Southern.

Santa returns to Ro-Na: Friends of Ironton will have annual breakfast

For those who love breakfast and Santa Claus, the Friends of Ironton have you covered with their annual Breakfast with... read more