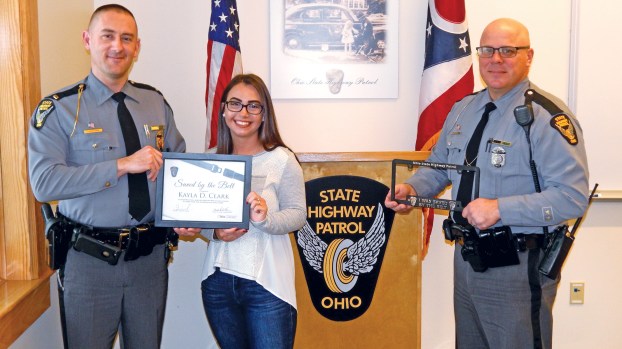 Kayla D. Clark, center, received a “Saved by the Belt” certificate on Tuesday at the Ohio State Highway Patrol’s Ironton Post on Tuesday. She was saved by her seat belt during an accident on State Route 93 on Oct. 17. Presenting the certificate were Ironton Post commander Lt. Nick Lunsford and Trooper Darrin L. Webb. (Submitted photo)

At a ceremony at the Ohio State Highway Patrol’s Ironton Post, Kayla D. Clark was presented with a “Saved by the Belt” Club certificate on Tuesday after her safety belt saved her from sustaining life-threatening injuries during an Oct. 17 accident on State Route 93 in Lawrence County.

“Kayla is a living testimony to the effectiveness of safety belts,” Lunsford said. “Everyone needs to buckle up every trip, every time.”

Provisional data from 2019 shows 457 people in Ohio were killed in traffic crashes when a safety belt was available, but not in use.

The “Saved by the Belt” Club is a joint effort by the Ohio Department of Public Safety and more than 400 Ohio law enforcement agencies. This club is designed to recognize people who have benefited from their decision to wear safety belts.

GETAWAY — For the past four years, the South Hills Longbeards chapter of the National Wild Turkey Federation have been... read more