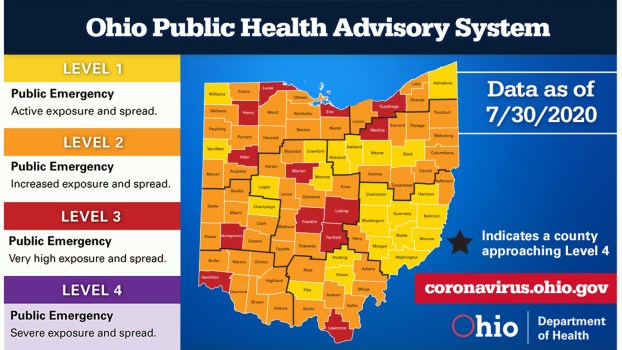 According to Thursday’s statistics, there were 1,733 new cases reported.

“This is not good news,” DeWine said, though pointed some improvements. “Today we have 1,049 individuals who are currently hospitalized compared to 1,017 on July 17th, so you can see the overall trend here continues to steadily increase. But we are seeing fewer people coming to emergency rooms for COVID-19 so that is a good sign.”

Of Lawrence County, DeWine said four indicators had been met to receive the Level Three designation, including sustained increase in new cases and increase in outpatient visits for corona symptoms.

“They’re moving in the wrong direction,” DeWine said. “This is not good news.”

DeWine said the county had multiple outbreaks, connected to funerals, a church camp, a restaurant and a long-term care facility.

On their Facebook page, the Lawrence County Health Department said that they had 148 new cases the first 28 days of July, compared to 64 over a 4-month period.

“These cases weren’t linked to a congregate setting, like a nursing home or residential treatment center. That shows there is widespread activity,” the post said. “There are also more people seeking outpatient treatment for (COVID-19).”

Overall, 13 counties were at Red Level Three on the four-tier system, down from last week. Neighboring Scioto County, which had also been a Red Level Three, was now downgraded to Orange Level Two.

DeWine noted, however, that fewer counties were listed at Yellow Level One, the lowest designation, this week, with most of Ohio now at levels two and three.

The governor again urged residents to wear masks and face coverings when in public, including those in rural counties.

After describing how people in eight Ohio counties were infected at family parties or public events and spread COVID-19 to others, the governor said he told the stories not to embarrass anyone or to disclose information about the cases, but rather to illustrate that it can happen to anyone.

“Look, this virus is just vicious, it does not care who you are,” DeWine said.

DeWine also said he has “grave concerns about the spread of coronavirus at establishments that serve alcohol for onsite consumption,” with outbreaks associated with bars across the state, including in Toledo, Cleveland and Columbus.

“The problem is, bars, by their nature, lend themselves to a revolving door of people in close contact, oftentimes indoors,” DeWine said. “Patrons either stay at one location, sometimes for hours or bar hop. Either way, they interact with many different people — especially the younger crowd. While this may have been fine during normal times, these are not normal times.”

DeWine said shutting down for a second time would be “devastating” to the state’s bars and restaurants.

“We are not going to do that today,” he said. “But I’m announcing that I’ve requested the Ohio Liquor Control Commission to call a meeting to consider enacting an emergency rule related to liquor sales.”

He said the proposed rule would prevent the sale of alcohol at all liquor-permitted establishments beginning at 10 p.m. each night. Consumption of alcohol would be required to end by 11 p.m.

“The businesses can stay open, but we believe that stopping alcohol sales at 10:00 for onsite consumption will help thin out the crowd and help slow the spread,” DeWine said. “This proposed emergency rule does include restaurants that serve alcohol, but our proposal will allow any liquor-permitted establishment that sells food to continue serving meals until closing.”

He said if the emergency statewide administrative rule is approved by the Liquor Control Commission, he intends to sign an executive order that would make it effective Friday night.

DeWine said he is also separating out his 10-person mass gathering guidance back into a separate order.

He said gatherings at a household or family residence should be limited to close friends/family and are recommended to be 10 visitors or less, while residents in a red/purple county should limit hosting or attending gatherings of any size.

“Young Prophet / Old King,” and acrylic on paper study by Robert Hutton, is one of the pieces the artist... read more