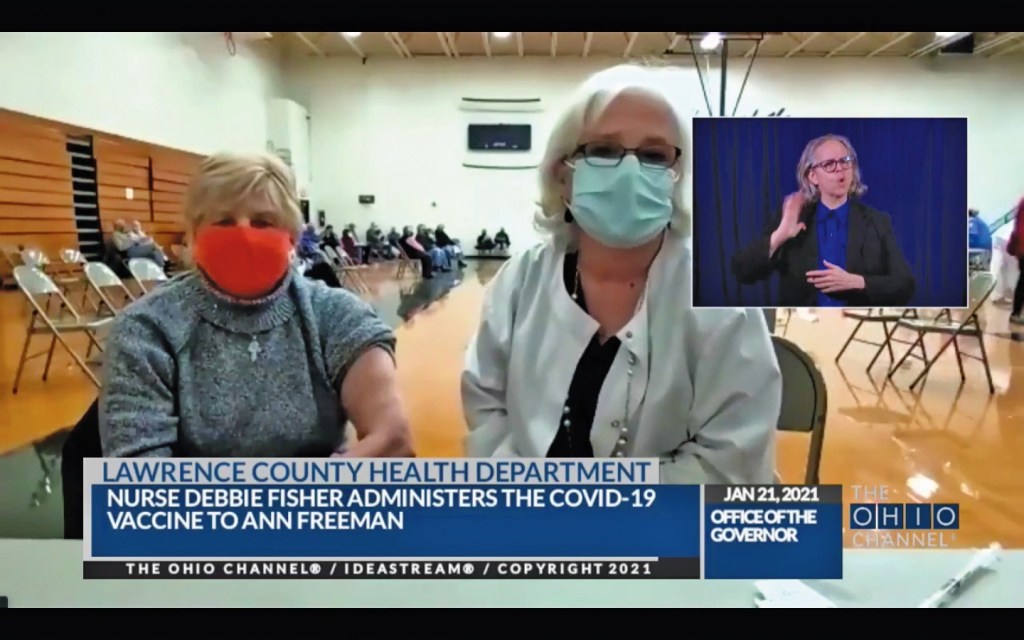 SOUTH POINT — A nurse with the Lawrence County Health Department was featured in Gov. Mike DeWine’s statewide news conference on the COVID-19 pandemic on Thursday.

During his update, DeWine checked in with locations around the state, with one being Lawrence County.

Debbie Fisher, with the health department, was in South Point where she was administering the vaccine to Ann Freeman during the broadcast carried on the Ohio Channel.

DeWine asked Freeman why she decided to receive the vaccine.

“I work with children,” she said. “I still work. To be on the safe side for myself and them.”

Fisher was one of the first two people in Lawrence County to get vaccinated for COVID-19, when, on Dec. 22, several workers at the county health department received the first of two shots of the Moderna vaccine.

Workers were vaccinated in pairs and Fisher, along with health department director Georgia Dillon, were the first to get the shots that day.

As the health department is administering the vaccine to the rest of the county, they were the first to receive it.

Ohio began Phase 1B of the vaccine on Jan. 19, with people of the age of 80 eligible to receive it. This follows Phase 1A, which covers first responders and those in congregate settings.

DeWine also gave the weekly update of the state’s COVID-19 alert map, compiled by the Ohio Department of Health. This week’s map saw no changes, with 83 of the state’s 88 counties, including Lawrence, at Red Level Three on the four-tier system.

This is the second stint at Level Three for the county, which was moved back to the designation on Oct. 8, 15 weeks ago.

“Thankfully, no county is seeing their status worsen,” DeWine said.

Hamilton County was the sole county at the highest designation, Purple Level Four, while Gallia, Monroe, Vinton and Hocking counties were at Orange Level Two. All counties in the state continued to receive an “H” designation for high incidence in cases.

DeWine pointed out the high incidence means the situation is still serious statewide.

“Out of any 200 Ohioans, at least one has tested positive for COVID during the past two weeks,” he said. “We still have more than one out of four patients who are COVID positive in our ICUs.”