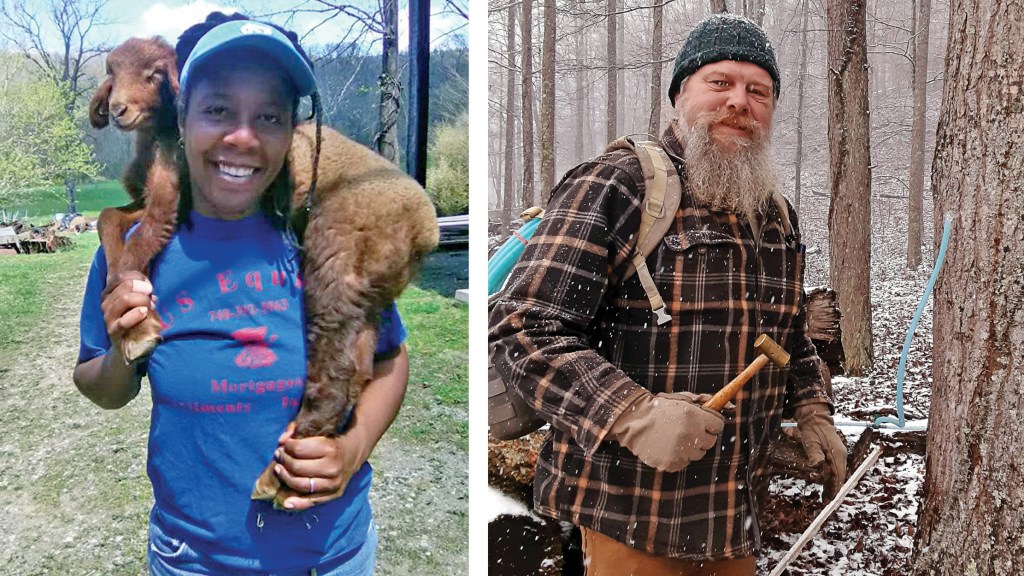 From wool to maple syrup to honey, Tarheelbilly Farm in Willow Wood produces a range of products made locally.

It began in 2013, when Ben Walker and his wife, Charis, moved to Lawrence County, where his family had a history of farming.

The Walkers met in LaGrange, North Carolina, where Ben was stationed in the U.S. Air Force, finding each other through the dating site farmersonly.com.

They married in 2007 and began microfarming on a half acre in North Carolina, where Charis is a native.

Now near Ben’s childhood home, the couple launched their farm, drawn from their two heritages.

Living on the farm with their 10-year-old daughter, Delaney, the Walkers have a herd of 22 Tunis sheep, which Charis shears and sends the wool off nationwide.

In addition to that, she also spins, knits and weaves and, as a professional welder, makes much of the equipment they use on the farm.

The Walkers typically sell their products at places such as the Ashland Farmers Market, but due to the COVID-19 pandemic, they have not been doing events this past year.

“We hope to be back,” Ben said, adding that they have been selling their maple syrup through direct sales and their fibers on Etsy for now.

“It’s tough not being able to socialize with friends and customers,” he said. Though he said the shutdowns have been a blessing, as well, allowing the family to be together more.

“I’ve been able enjoy it with them,” he said.

In the meantime, Ben says they have expanded their herd of sheep and now have 25.

He said he has learned as they have farmed in the county, that the woody pastures here are better than realized at first.

“The sheep do better when it’s more diverse,” he said. “It’s not what we thought. The diversity here is better.”

They have also amped up their maple syrup production, up from 15 taps when they started and 450 just two years ago.

Ben said he has spent the last few weeks cleaning up the hillsides and the miles of tubing to the trees.

Due to the emerald ash borer, there are numerous dead ash trees falling throughout the county.

He said it takes about 60 gallons of sap to make a gallon of syrup and that he can get about 1.3 gallons out of single tree.

Ben said that the syrup from Appalachia is popular and often wins test tastes.

“I’ve had people tell me it’s the best syrup they’ve ever had,” he said.

Ben said they try to be as diverse as possible in their work. They’ve raised their own hogs and hope to get a breeding pair this year, and, as a member of the Ohio River Bee Society, Ben says he has seven beehives going.

He also uses his woodworking skills to build and sells hives to others.

Stating that he has “the gift of gab,” Ben’s enthusiasm for talking about farming is quite evident.

He stresses that nothing they do is a hobby and that they are not a “hobby farm.” It is a full time job, and a sustainable business.

Growing up as a teen farming, he said he hopes to “continue a legacy” locally, that his family was a part of.

“When I was a kid, everyone raised tobacco, but that went out,” he said.

Since moving back to the area, he said they have learned a lot from other locals.

“I’ve really enjoyed networking with other producers,” he said.

Everything from Tarheelbilly Farm is chemical free and no fertilizers or shots are used.

“It’s all grass fed,” Ben said, stating they want to grow things as God did.

He said this organic approach is key to their mission.

“We want to be good stewards of the land,” he said. “That’s very important.”