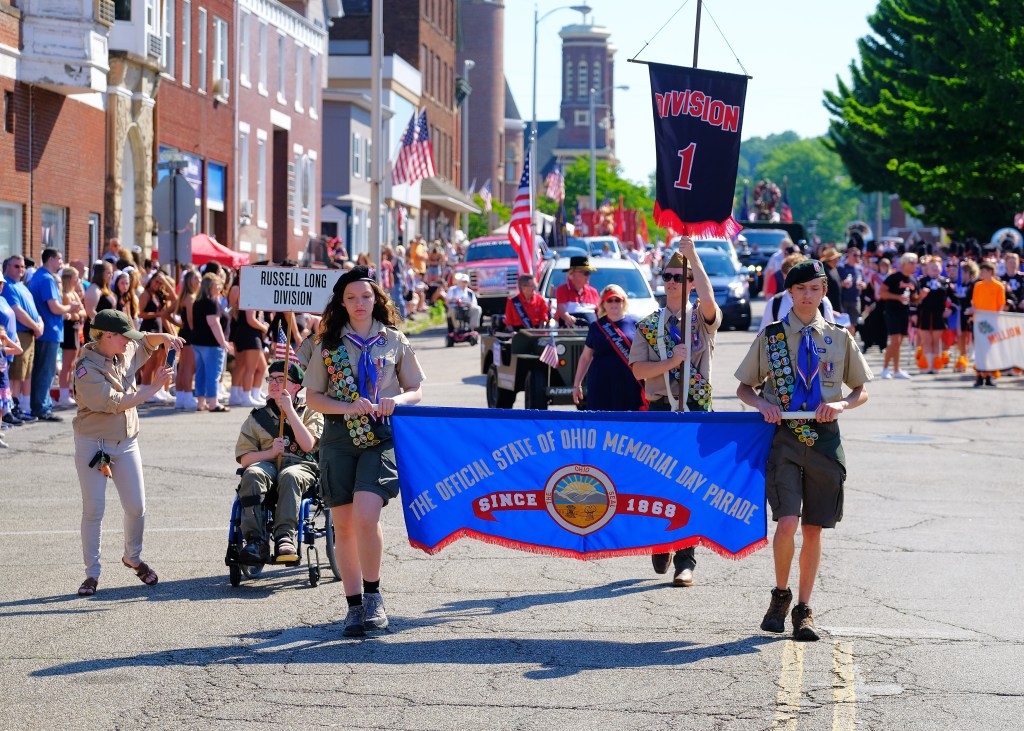 Eagle Scouts and siblings Sami and Ben Anderson, of Scout Troop 106, of Ironton, carry the banner at the start of the Ironton-Lawrence County Memorial Day Parade on Monday. (The Ironton Tribune | Jeremy Holtzapfel)

It was clear early into Monday that it was going to be much hotter than last week, with temperatures soaring into the 90s, but the heat and the sun did not stop the crowds from coming out for the 154th Ironton Lawrence County Memorial Day Parade.

“I’m burning up,” Lawrence County Commission President DeAnna Holliday said, when asked by the crowd how she was doing while walking the route.

As usual, the parade brought thousands to downtown Ironton and saw an increase in both participants and attendees from last year, which took place as large scale events began returning from the COVID-19 pandemic.

Organizers had scaled down the parade in 2020 and held it without spectators, while livestreaming it and maintaining its claim as the nation’s oldest continuous Memorial Day Parade.

It took a little over two hours for the parade’s 10 divisions to complete the route.

“I think it went great,” Lou Pyles, of the parade committee, said after its finish. “We had a few people overcome from heat, but that sense in this weather.  We had good crowds on the streets and a full parade. It was a large lineup. We’re very happy with it. I hope everybody enjoyed it today.”

Pyles said the event, with a theme of “Honoring sacrifice for freedom,” saw an increase this year, especially with military participants.

“We had a lot more military,” she said. “A lot of places have a Memorial Day parade but don’t have military.”

Overall, the parade saw a boosted lineup from last year, with several regulars returning.  More schools took part in the event as restrictions continued to be lifted. Several schools, who had seniors graduate last week, had marching bands and others in the event, while Ironton Elementary hosted a large float with re-enactors.

The crowd began turning up before dawn, picking out spots along the route.

Pyles said, from her observations walking the route, the crowd was thicker this year and she saw many children enjoying the parade.

“That’s great,” she said. “I’m glad they’re out and seeing a little bit of history.”

The grand marshal for this year’s parade was Lori Donohue. Joe Sharp was parade commander and Lloyd Richmond served as honorary grand marshal.

The parade was preceded by the Navy Night ceremony on the river last week, as well as a fireworks display from the riverfront on Saturday and a memorial ceremony at Woodland Cemetery on Sunday.

— View a gallery of photos from the event HERE.