Big I radio at its best 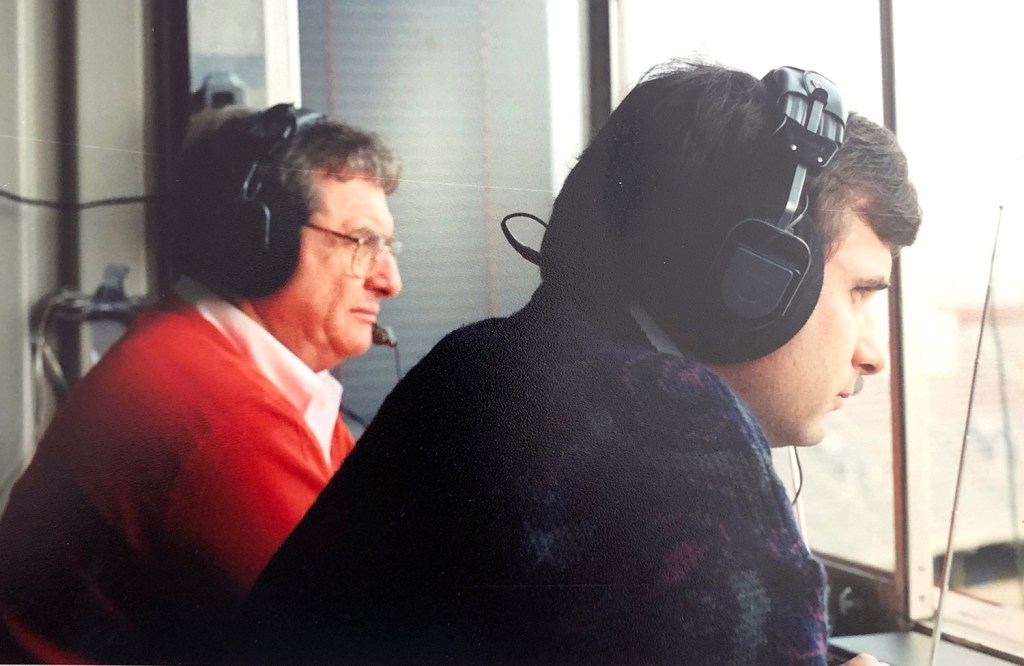 From music to sports to tragedy, WIRO was there

EDITOR’S NOTE – This is the third in a four-part series, which will run each Saturday through October. Part one is available here. Click here for part two.

Steve Reinhardt speaks of a “continuing passion” for WIRO by those who were fortunate to work there, often beginning as radio newbies under the tutelage of Ken Auble.

WIRO was, he says, “a family thing, our place of beginnings.”

We were neighbors. Steve accompanied me to the station from time to time and I shared the ropes of the Radio Biz with this energetic, talented guy. 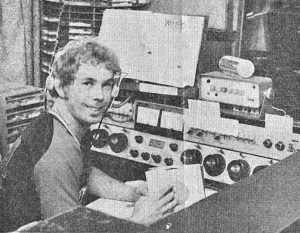 Announcer Steve Reinhardt at the WIRO controls in the late 1970s. (Submitted photos)

He soaked it up, and, after earning the required FCC 3rd Class License (with Broadcast Endorsement) — as we all did back in the day, hit the weekend airwaves in 1972 while still a high school senior.

Steve jumped to full-time status in 1973 and soon become the Big I’s music director. And, in turn, he trained radio newbies too, including his friend Rick Mayne, another key player in the history of WIRO radio.

Steve worked for Ken Auble for eight years and added another 33 years to his resume during his Tri-State area radio career.

Steve suggests WIRO was the audio version of The Ironton Tribune.

“You got everything you needed: the day’s news plus breaking news, sports, great music and super DJs. Ken had the programming just right,” he says. “Really, no other station in the Tri State market offered what WIRO had. No other station was so diverse.”

“Ken,” Steve recalls, “never worried about radio ratings. He knew he was touching the heart of the community and delivering the goods. Ironton and WIRO were synonymous!”

He faced what he calls the “acid test” of reading news and sports copy as audition after interviewing under Ken Auble’s raised eyebrow.

His friend “Rhino” Reinhardt taught him how to operate the radio station’s day-to-day.

Soon, he was in the air chair running Sunday morning church programs and spinning records on the night shift.

On game nights, Rick learned to simultaneously manage the Ironton and Russell sportscasts on the Big I stations, yet another test of timing and technology. 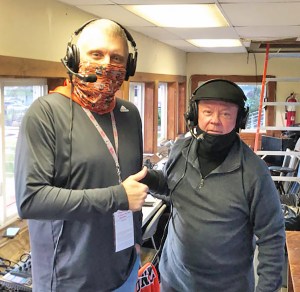 Mr. Auble eased Rick into local high school sports in his second year, then, in the spring of 1979, named him the new “Voice of the Tigers.”

Rick recalls his play-by-play being punctuated by Ken’s enthusiastic interjections like, “You’d better believe it, baby!” and “The blocking down field was just beautiful!”

“The highlight by far that first year was calling Ironton’s unforgettable football victory in their first state championship, the day after Thanksgiving 1979.

It seemed,” he says, “like half of Ironton was in Akron to see the game. The other half was back home counting on WIRO to bring all the live action to them on the radio.” (You’ll see Rick in the video documentary, “SEVENTY-NINE.”)

The Big I & IHS Sports

Steve Reinhardt contends that the partnership of WIRO Radio and Ironton Tiger sports was “a marriage made in heaven.”

Rose Auble tells us, “Sports was always a big part of the station; it was really important.” — and then some!

Local businesses waited in line for the golden opportunity to sponsor the broadcasts the town was tuned into.

When the Tigers’ bus pulled into an opponent’s city, the Big I sports wagon parked right beside it.

Ironton’s coaches respected Ken and loved seeing him scurrying about in preparation for the broadcast: arranging equipment, laying lines, testing microphones and making all-things-technical perfect before the game.

There’s a long line of WIRO sportscast personalities who’ve applied their unique talents and love of the game over the years, gaining the respect and gratitude of Tiger fans, as well as the coaches and teams. They include Mac McElroy, Ken Jones, Fred Hensley, Frank Houston, Ken Auble, Bill Ball, Greg Houston, Rick Mayne, Steve Reinhardt and Homer Waddle.

Frank Houston was the play-by-play announcer for many years.

His son Greg, who was privileged to work beside his dad before taking his turn on the hot mic says, “Dad was a great ambassador for IHS sports.”

“Dad was feisty,” says Greg. “He called it like he saw it!” —Something his listeners knew well.

In Greg Houston’s estimation, Ken Auble’s commitment to highlighting IHS sports defined WIRO’s professionalism in the community and the region.

This unique Ironton brand — the symbiotic relationship between school and radio — led other radio stations to emulate the Big I’s broadcast excellence.

People throughout the region knew Ironton sports because of “the strength of the sports programs and the enthusiastic, consistent coverage by WIRO.”

By the way, do you remember Frank Houston and his brother, Paul — the public address announcer in the Ironton press box — harmonizing on the Ironton High Alma Mater during half time? Classic.

Then there were the times when WIRO’s role in the community was to field the anguished phone calls, keep up-to-date information flowing, and put on the brave voice during times of tragedy — Like Nov. 14, 1970.

The Marshall airplane crash took the lives of all 75 passengers and crew including most of the university’s football team, coaching staff and local fans of the Thundering Herd — and Ken Jones, former Ironton, Rock Hill and Herd head coach Charlie Kautz; and WCMI’s Gary George.

One of the first on the scene at Tri-State Airport was Ken Auble.

Homer Waddle was on Radio Plaza that “rainy, cold night” when Ken called in on his CB radio, “KL2949 to base. Are you receiving?”

WIRO was the first to tell the Tri-State there were no survivors.

Canceling the Sunday morning programming, Ken and Homer were back on the air at 6 a.m.

Rick Mayne reminds us of other heart-wrenching events that broke the hearts of our community: the deadly May 1977 Beverly Hills Supper Club fire in Southgate, Kentucky, which had a deep impact on many local families, the sudden passing of Elvis Presley later that summer triggered unbridled passion and non-stop requests to hear everything Elvis recorded, and the constant calls and music requests following the murder of John Lennon in 1980.

“The most impactful local news story I experienced,” Rick recollects, “displayed WIRO’s professionalism to national and international news audiences by reporting breaking news on the disastrous Rich Oil storage tank fire in the heart of downtown Ironton in March 1979.

Media calls poured in from all over the world demanding details on the catastrophic loss of two lives and the untold thousands of gallons of oil burning into thick, black plumes that smudged Ironton’s skyline.”

Next week: Our series on WIRO, Ironton’s full-service community radio station, concludes in our next issue with a Tribute to Ken Auble — the Heart of Big I Radio — and a final word from Mrs. Rose Auble.

In January 1969, after radio school in Columbus, I embarked on a 30-year-long, life-in-radio on the Monday through Friday 9-til-midnight shift on WIRO, as well as pieces of Saturday and Sunday. Sandman Serenade was no longer on the air.

My program was “Music West of Midnight.”

My program opening and closing theme song was an instrumental medley of Paul Simon’s “Sound of Silence” and “Scarborough Fair” recorded by the Mystic Moods Orchestra.

It was my time of beginnings too — in radio and in life.

I would have my turn working all the shifts and most of the jobs available in the small, full-service radio station: selecting the records, covering news events, and running the programming — five years at the Big I; then three years as a broadcast journalist at “TCR” and “KEE,” followed by 22 years in non-commercial radio.

I’m sure some of my ideas pushed Ken to distraction.

In only a few instances, however, did he address me as “Mister!”

This was his trademark comeuppance for those of us who pushed his boundaries.

It certainly caught my attention and reminded me whose radio station it was.

Yet, he was always kind and supportive.

Sitting on a shelf next to me as I write this is the radio that Ken and Rose gave Sue Ellen and me for our wedding gift in 1973: A radio. It is so…them.

Besides the echoes of the many memorable voices that return to mind time and again, I hear Ken’s strong voice and watch him rush past focused on his never ending engineering duties.

I recall those familiar radio smells of ozone and overheated transmitter tubes. And the scent of Ken Auble’s Borkum Riff pipe tobacco. We were family. We still are.

Small towns need their local Big I-type, full-service teapots with music, news, and sports and church programs held together by friendly-voiced DJs who care about their community. WIRO was always right where it needed to be, serving as the heart of its community, part-&- parcel of its everyday life.

It was the quintessential American radio station. In our hearts, long may you run.

(Submitted for publication by Gordon Hall. Copyright on work reserved by the author.)