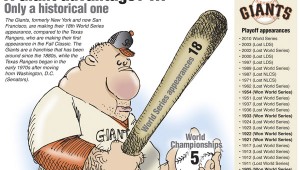 SAN FRANCISCO — Buster Posey, Pablo Sandoval and the rest of the San Francisco Giants can study the scouting reports and videotape all they want, trying to find the secret to getting a hit against Cliff Lee.

Or, they can just ask Cody Ross.

Because many years ago, before he blossomed into the MVP of the NL championship series, Ross was a struggling rookie with the Detroit Tigers. Who happened to hit his first major league home run off Lee. A grand slam, at that.

Of course, Lee was early in his career, too. He hardly had become Mr. Perfect in the postseason, the left-hander who will pose a giant challenge for San Francisco when it faces the Texas Rangers in Game 1 of the World Series on Wednesday night.

Watch Lee from the center-field camera and it’s difficult to tell exactly what makes him so dominant.

Maybe it’s the way he throws any of his pitches for strikes on any count. At any speed, too. A real-life version of a video game — try to duplicate that in “Major League Baseball 2K10.”

“Confidence, relying on my routine,” Lee said Tuesday before the Rangers worked out. “Going out there and expecting to be successful.”

Lee is 7-0 with a 1.26 ERA in eight lifetime postseason starts heading into his matchup with two-time NL Cy Young winner Tim Lincecum in the opener. Lee went 3-0 this year in the AL playoffs, striking out 34 and walking just one.

Lincecum and Lee pose an intriguing matchup of opposite artisans. The Giants’ lanky ace’s pitches have dizzying movement, while Lee is able to adjust his pinpoint control for an umpire’s strike zone.

“If you can command your fastball and change speeds, you’re going to have good results,” Maddux said.

Lee’s severe strikeout-to-walk ratio has prompted many to suggest the best strategy is to hit the first strike he throws, rather than risk falling behind in the count.

A win over the Giants will tie Lee for the best start in postseason history — Orlando “El Duque” Hernandez, with all his quirky gyrations and deliveries, won his first eight decisions.

To Lee, it’s all rather routine. In fact, there was a neat picture of him during the playoffs, yawning in the dugout at Yankee Stadium.

Sure doesn’t look like someone pitching in huge games.

“I don’t really look at it like that,” Lee said a few days ago. “Some people might, I don’t feel any more pressure.”

Lee has been equally perfect against the Giants — three starts, three wins and a 1.13 ERA. He last faced them in 2009 in his first start after being traded from Cleveland to Philadelphia, and breezed at AT&T Park.

“Weather and clubhouse and the bullpens” are different, he said. “Once you get on the mound, it’s 60 feet, 6 inches and you’ve still got a professional hitter in there trying to do damage off of you. To me, that doesn’t really matter that much.”

Call it superstition or just being comfortable, Lee doesn’t like to change his hat, glove or cleats during the season. Sometimes he has to — he’s been traded four times in his career, most recently from Seattle to Texas before the All-Star break.

Lee found himself with mixed emotions watching Philadelphia, where he won twice in the World Series last year, play San Francisco in the NLCS.

Sure, he was friendly with many of his former Phillies teammates. But there was the other side of the baseball business.

“I didn’t mind seeing them get beat because they got rid of me,” he said.

Now, the Texas pitchers are the ones who benefit from Lee’s presence.

“I’ve become more like Cliff in my preparation since he’s been here,” starter C.J. Wilson said. “I watch what he does through an order, and if they don’t adapt he doesn’t have to. Whereas I used to get into trouble before, where I would adapt maybe before the hitters showed me an adjustment, and I would basically turn into their strengths. But Cliff trusts his strengths to the degree that he doesn’t think he has to do anything different from game to game.”

Several of the Giants have faced Lee many times.

Rowand is willing to give any advice he can.

“You can watch video. You can talk to them about what his out pitches are, what he likes to do when he’s ahead, and with runners on,” he said.

Ross had played a handful of games in the majors and had only two career hits when he faced Lee on Sept. 2, 2003. Ross struck out looking his first time up, but got more than even in his next at-bat, launching the first grand slam ever allowed by the young Cleveland lefty.

The game was memorable for Ross because of something else. In the late innings, he tripped over first base beating out a bunt, tore his knee, was carted off the field and done for the season.

Both Ross and Lee have come quite a way since then. They haven’t faced each other since the slam, either. Ross promises his team will be ready for baseball’s No. 1 postseason ace, having already solved the supposedly unbeatable Roy Halladay in the NLCS opener.

“It was the Halladay show a week ago after he threw the no-hitter against the Reds,” Ross said. “We’re not surprising anybody, believe me. Everybody knows how good our pitching staff is. But I think we prefer for everyone to talk about everybody else.”

The Associated Press COLUMBUS — Minnesota has fired its coach, lost its past seven games and appears to be in... read more