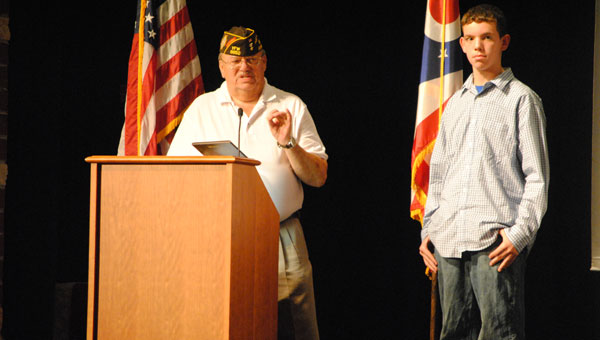 Veteran Jack D. Leonard presents Nathaniel Hale, sophomore at Ironton High School, with an award for an essay contest from the AmVets.

While some schools in the Tri-State dismissed classes for Veterans Day, others remained open and used the time to remind students what the day is all about.

Just after 1 p.m. Thursday, students poured into the auditorium at Ironton High School for the annual student-led Veterans Day Assembly. The event began with “The Star-Spangled Banner” and the Pledge of Allegiance. Several students presented information about wars the United States has been involved in. The Ironton High School Singers presented a couple of patriotic songs, including “God Bless the USA.”

Veteran Jack D. Leonard, 69, from the U.S. Army, spoke to the students about his time in the service.

“I went into the service when I graduated, to get it over with,” he said. “Back then, everybody had to serve a couple of years or go to Canada or go to jail. But I ended up staying 32 years.”

Leonard spoke about the Vietnam War, and about the loss of two dear friends. He spoke about people who are still missing from the war all these years later.

“You don’t realize what you got until somebody tries to take it away from you,” Leonard said. He said he doesn’t speak about too many of the details of the war, and that most others who were in it don’t either.

Leonard also presented an award to one of the students who won an award for an essay he wrote about the Vietnam War. Nathaniel Hale, sophomore, won the Freedom Foundation with the Amvets. He received a plaque, a scholarship and an all-expenses paid trip to Philadelphia for a conference. His mother, Dana Carter, said Nathaniel’s English teacher had the students write the essays, without even knowing he was entering a contest.

Leonard said he felt it was good to speak to the students to inform them of what happened.

“Half of these kids, when they hear Vietnam, they don’t know what that means,” he said. “It isn’t taught. I want them to know there was a reason.”

Leonard said he didn’t want to go into negative aspects of the war, but keep it about things like the treaty organizations that took them into those countries.

Brian Bowling, history teacher, helped to plan the student-led event and said he thought the event went very well. He said there are a couple of reasons why a program like this is important.

“We need to recognize those who sacrificed and gave for others,” he said. “It is also important that we know our history. Anytime you can integrate history, it’s a good thing. If we forget the past, we repeat mistakes.”

Principal Joe Rowe was very pleased with the event.

Rowe said he wants today’s event to impact the student’s lives for more than just one afternoon.

“I hope it made a lasting impact on a lot of kids here, to be thankful for every veteran,” he said.