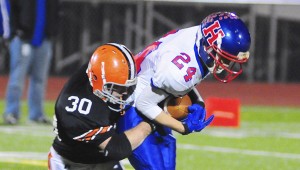 The season of replays is getting two more at one time.

And the Fighting Tigers (10-2) will face the Hawks (10-2) at last week’s playoff site as they return to Logan High School for a 7:30 p.m. game Friday in the Division IV Region 15 championship game.

“You hope to get some turnovers, but it’s something you can’t count on. They’ve got some guys with a lot of speed who can make big plays. We have to keep them bottled up like we did the last time,” said Ironton coach Bob Lutz.

All-Ohio tailback Noah Key ran for 246 yards on 35 carries and scored five touchdowns in the win over Heath.

Playoff tickets will again be on sale this week starting Tuesday during business hours at Bob Linn Sporting Goods and at the auto shop office behind the high school during school hours.

Tickets will be $7 in advance and $9 at the gate. Ironton receives only a small percentage of the presale. All other money goes to the Ohio High School Athletic Association who sets ticket prices.