The Lawrence County that Billie Smith knew growing up had changed a lot by the time she returned after 35 years away.

And what she saw made her sad and disappointed. Smith had lived in big cities and small towns across the United States as wife to a corporate airlines pilot. She was at ease living anywhere, whether it was California, Virginia or Atlanta.

Smith knew how other communities cared about how they looked. But that wasn’t the case, it seemed when she came back to Southern Ohio, a bride for the second time to high-profile television newsman and economic development promoter Bob Smith.

“I came back after my first husband died while I was in Atlanta. Coming back home the economy had taken its toll on our area,” the Proctorville, Ohio, resident recalled recently. “Because I am from here, I was very passionate about the area. I wanted to see pride restored. People being proud of where they are living.”

That disappointment quickly dissipated as it galvanized Smith into doing a special kind of cleaning job on the streets where she now lived. 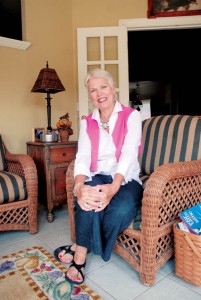 “I just had this great burst of inspiration,” she said. “Instead of complaining about it, try to do something about it.”

Enlisting the help of Taunya Wilson and her sister, Kathy Gue, Smith came up with a grass-roots organization in all senses of that word.

“The three of us got some of our county officials together and told them what we would like to see happen,” Smith said. “We made some phone calls and got people together.”

Operation TLC, or Tidy-up Lawrence County, had its first litter cleanup in April 2005.

Now TLC has cleanups three times a year, but Smith and the group want more. They recently had a master plan for beautification projects drawn up, the first step in getting grants to fund their plan.

They want to make sure the grass is greenest just where they’re at.

“It started with the passion to see change, to get other people involved who wanted to see change too,” Smith said. “Everybody we’ve talked to, businesses, politicians. I don’t care. When we go to them, they have been so supportive. Every door has opened to us.” a

Attorneys dispute care given to patient

An attorney for Woodland Oaks presents to the jury at the Boyd County Justice Center in Catlettsburg, Ky., charts and... read more