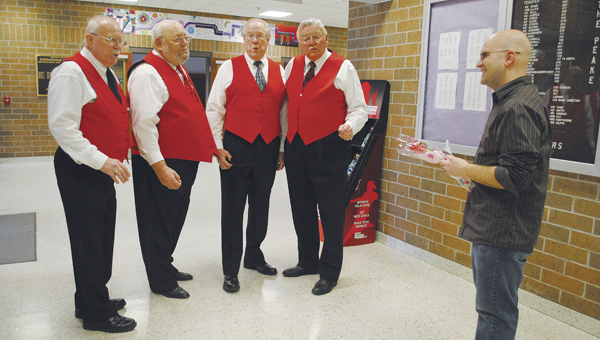 CHESAPEAKE — Jordan Morrison was minding his own business Monday, walking through the hallway at Chesapeake High School, when he was called to the office. He had no idea what would be waiting for him on this Valentine’s Day afternoon.

For Valentine’s Day, many people chose to show their love in the traditional way, with flowers, candy and cards. But some people, like Morrison’s wife Erica, chose to do things a little differently.

“I was not expecting that at all,” Jordan Morrison said.

Erica enlisted the help of the ThunderTones Chorus, who advertise singing valentines by barbershop quartets. The team of four showed up at Chesapeake High School, where Morrison works as a video productions teacher. They serenaded him, first with “Let Me Call You Sweetheart,” followed by “Heart of My Hearts.”

Morrison, who is in his early 30s, said his wife of more than two years has sent him flowers before, but hasn’t done anything to this degree.

“It was embarrassing,” he said with a smile, “but it was awesome. I had a good time.”

Two quartets from the ThunderTones traveled across the Tri-State to sing to 50 unsuspecting recipients. They began at 8:30 a.m. and kept going until 7:30 p.m. Dressed in their red vests and black ties, the quartets will go to workplaces, homes, restaurants – anywhere really – to sing songs and present a keepsake gift along with a card with a personal inscription from the sender.

The group has performed singing valentines for seven years as a fundraiser to help pay for the cost of music and to send some high school students to a harmony camp.

“It’s a blast,” said Bob Mauk, ThunderTones president. “We get in funny situations. The guys are always embarrassed and the girls usually have a tear.”

Mauk said once they sang at Tri-State Airport for a serviceman. “His wife had sent a valentine and he looked like he could whoop up on all of us.”

Mauk said the man’s military buddies were giving him a hard time about it.

“He was openly embarrassed,” Mauk remembered.

Another situation, while not involving Mauk, is one he couldn’t forget. The quartet arrived at their first stop of the day, around 8:30 a.m., when the husband answered the door and motioned for them to come in quietly. He led them to the bedroom where his wife slept comfortably. When the quartet member blew into the pitch pipe to set the right key, the wife sat straight up in bed. They all had a good laugh.

Jordan Morrison’s experience Monday is something senior student Kristen Webb was glad to be able to see. She was working in the office when the quartet showed up.

“I thought it was hilarious,” she said.

Morrison joked about what he will do for his wife now that she has done something so special.