Hope for his future 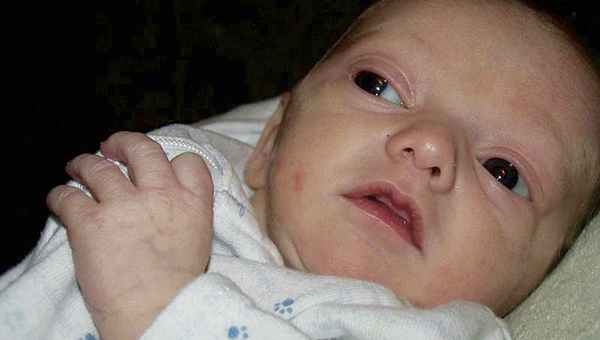 Erica Melvin, of Deering, was taking care of her newest addition to the family, her 1-week-old son Zion, when she got the phone call from the doctor.

Zion’s cystic fibrosis screening, which is now mandatory in all 50 states, came back abnormal.

“We were hoping it was a false positive,” Erica said.

A couple of other tests later, it was confirmed. At 32 days old, Zion was diagnosed with cystic fibrosis. Erica remembers how she felt when they found out.

“Very overwhelmed, very guilty, because it’s something we pass on,” she said. Erica said that one in 20 Americans has the cystic fibrosis gene and don’t even know it. Cystic fibrosis affects the lungs and digestive system.

Erica said her thinking and her focus began to change.

“It was also a lot of, ‘Well, he has this and being upset isn’t going to help it go away. We’ll do what we have to do and make his life go on as long as possible.’”

Erica said Zion is typically a very happy baby, though she said he does have some cranky spells due to the stomach pain caused by pancreatic deficiencies that go along with cystic fibrosis. She said he is generally happy and smiling and he is learning to play.

Erica is on an extended leave of absence right now from her job at Help Me Grow so that she can stay home with Zion. She said that a daycare or a babysitter isn’t an option right now, due to the training the caretaker would need to look after him and because of the germs.

Each day, Zion requires a morning breathing treatment, followed by chest physiotherapy to clear his lungs, which is done twice daily. He takes 12 pills a day to be able to eat his food, digest and grow.

Erica and her fiancé Josh Stallard stay busy between taking care of Zion and his two siblings, Allie, 2, and Josiah, 1. They are thankful for the good support system they have.

“Without our family, I don’t think we would be able to handle a lot of it,” Erica said. “It gets overwhelming to be in the house all day every day with three children under 2.”

She said their church, Cross Community Church, or C3, in South Point, along with a couple of other churches in the area, have been very supportive with cards, help and phone calls.

“Things like that really mean a lot,” she said.

Her family and friends will be participating with her in Great Strides, the Cystic Fibrosis Foundation’s annual walk that will be on May 14 at Ritter Park in Huntington, W.Va.

The goal for Team Zion is to raise $1,500 to go toward cystic fibrosis research. Information on donating for Team Zion can be found at www.cff.org/Great_Strides/EricaMelvin.

“We want a cure,” Erica said. She said they are very hopeful about his prognosis and his future.

Team Zion is hosting another fundraiser prior to Great Strides to add to the total. From 11 a.m. until 2 p.m. on March 26, 2011, at the Ironton City Center, representatives from a variety of companies will be selling their goods, and lunch will be sold and a gift basket raffled off. Some of the vendors include Pampered Chef, Thirty-One Gifts, Scentsy Wickless Candles, Cooke Lee Jewelry and Picture Perfect Photography. All proceeds will go to Team Zion for the Cystic Fibrosis Foundation.

Students stepping out to help others