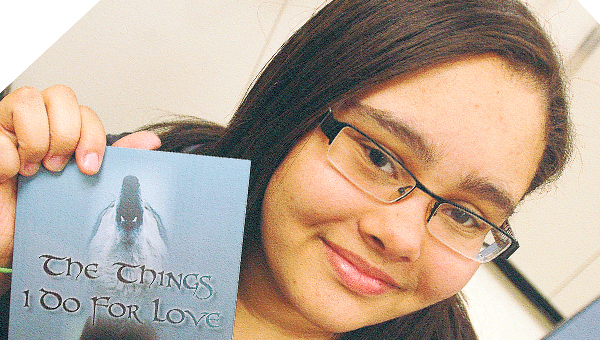 South Point High School student Sydney Pennington shows off her literally work “The Things I do for Love.” THE TRIBUNE/JESSICA ST JAMES

When Sydney Pennington was younger, she wouldn’t have described herself as a bookworm.

“When I was little, my mom had to force me to read,” said Sydney, now 16 and a sophomore at South Point High School. Her disdain for reading didn’t stop her from writing though.

Around sixth grade, Sydney and a friend were walking by Jerry’s Pay Lake in South Point, past a wooded area, when they came upon a rusty barge. Ideas started forming.

Sydney said the two of them were always making up stories and acting them out, but this one she decided to write down.

“I have a really active imagination and wanted to put it into words,” she said.

Sydney wrote a few chapters that year, and then put it down. A few years later, her friend made her pick it back up and finish it. A year and a half later, “The Things I Do For Love” was completed.

The main characters in the book are Serenity and her sister Rena, werewolves, who are being forced by their father to marry outside of their pack to increase his territory. The only way out of it was for the sisters to run away.

When Sydney was nearly finished writing the book, she began checking out self-publishers online. Now her book is available on Amazon.com and iuniverse.com.

Having accomplished publishing a book at such a young age is a good feeling for Sydney.

Sydney enjoys reading these days and said her favorite types of books to read are fiction, horror and romance, with Dean Koontz and Stephen King her favorite authors. English is now her favorite subject and Sydney said her English teachers are pretty proud of her.

“I have a little notebook of ideas,” she said. She also thinks a sequel and a prequel to “The Things I Do For Love” are possibilities in the future.

Writing isn’t her sole passion though. She also wants to be a chef.

“I love to cook,” Sydney said.

The man who has spent a career making things happen behind the scenes was put front and center by his... read more