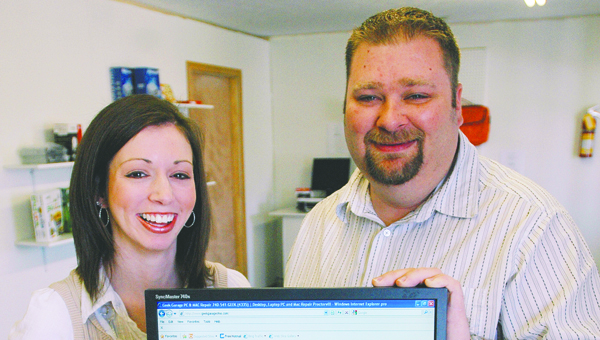 Amy and Kenneth Jackson, of Huntington, have taken their geek tools of the trade and set up shop in Proctorville at their new business Geek Garage. Geek Garage features computer repair and parts. THE TRIBUNE/JESSICA ST JAMES

Kenneth and Amy Jackson, of Huntington, W.Va., opened Geek Garage in Proctorville a week ago, in an office on Trent Street, next to the BMV. Geek Garage specializes in desktop and laptop repair for PCs and Macs.

“I really like working in this area,” Kenneth Jackson said.

With 15 years of computer experience, Jackson said he is a Dell certified systems expert.

“I’m certified in just about anything,” he said.

Jackson said they are the only Mac repair office in the local area. In addition to computer servicing, they also sell new and used computers and parts. Geek Garage will also buy used laptops.

Some of the more common services they offer are virus and spy-ware removal and hardware installation. They can do website design and also provide DC jack repair.

“Not many people do that around here,” he said.

Jackson said most often repairs can be made the same day, with the worst-case scenario being next-day service.

He said they also offer onsite and in-office repairs. Hours are Monday through Friday from 9 a.m. until 6 p.m., and Saturdays by appointment. Earlier drop-off times can be arranged as well.

Jackson said they will call the customer and give them an estimate before they fix the computer.

“We do free diagnostic testing on desktop computers,” Jackson said. He added they don’t charge by the hour.

More information can be found at www.geekgarageohio.com. The phone number is 740-451-GEEK.

Whether it be roadside, at the scene of an emergency, or in a crisis situation, rural first responders are often... read more