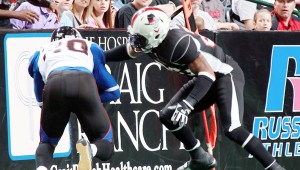 DALLAS — Jason Harmon enjoys recording rap music in his spare time, but he might want to use a rock ‘n’ roll song by Aerosmith as his theme, namely “Dream On.”

Now in his second year with the Dallas Vigilantes of the Arena Football League, the 28-year-old Harmon continues to work toward making his dream of playing in the NFL a reality.

“That’s always a goal. I’m trying to get back there,” said Harmon. “We’ve already had a player picked up (last week) in Canada.

“If I get another chance I will take advantage of it. I know what to expect. It can happen. But you’ve got to win to get a chance.”

The 6-foot, 200-pound Harmon was a four-year starter at Michigan State and led the team in tackles twice and was second in another season.

Last season with the Vigilantes, Harmon had an Arena League career-high 105 tackles and was ranked seventh in the league.

This season he has 52.5 stops through 12 games including 48 solos and is tied for 36th in the league. He also has three interceptions, nine breakups, three forced fumbles and two recovered.

“I’ve played Arena League football for four years. I feel comfortable. I feel like a veteran. It’s not slow to me, I just know where to be,” said Harmon. “There’s still a lot of speed. You still have to be on top of your game.”

Dallas is 7-5 on the season and trails Chicago by two games in the Central Division. However, the top eight teams qualify for the playoffs and the Vigilantes are currently among the top seven.

With five games to play — Saturday night’s game at Iowa not included — the Vigilantes are poised to make the postseason after a dismal season last year.

Harmon said making the playoffs is a key to reaching the next level. The Arena Football League and Canadian Football League are the only two feeder leagues that the NFL scouts for possible talent.

Harmon has been close to realizing him dream. After playing a year with the Frankfurt Galaxy of NFL Europe, he was in the Chicago Bears’ camp in 2006 and made it to the final cut.

“I feel like I should be a Bear. I feel like if I get a chance to go back I’ll make it,” said Harmon. “I feel it’s an advantage to being a professional at any level and to have been in a pro camp.”

Although Harmon would like another chance in the NFL, right now his focus is on making the Arena League playoffs and winning a championship. After two years with Denver and two in Dallas, Harmon likes his team’s chances.

“We think we can get a ring,” said Harmon. “We let one game slip away (at home). Every game we’ve lost was on the road. The crowd is a big deal in the arena league. A lot of arena fans don’t travel so you can’t steal the excitement away.

“This is one of the best — if not the best — teams I’ve been on. The guys really care and they put the time in.”

Ever since he was an All-Ohio defensive back for the Ironton Fighting Tigers, Harmon has been known for his hard-hitting, physical style of play in the secondary. Harmon likes a crunching tackle as much as an interception.

“That’s just my game. It’s still physical. I’m still knocking heads and still loving it,” said Harmon with a chuckle. “I’m known for it. I get a couple of big hits a game. We have some guys on this team that are physical and fly around.”

A couple of years ago, Bob Lutz became the all-time victory leader among Ohio High School football coaches. After that... read more