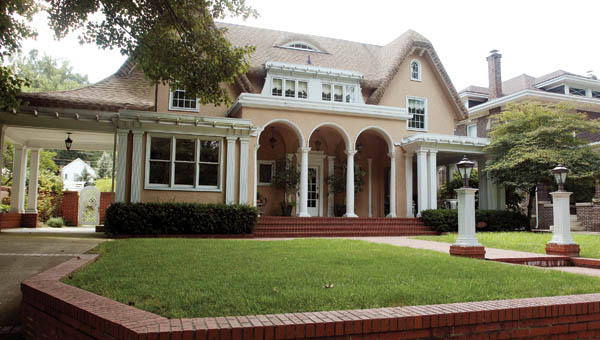 Ashland, Ky., home stands out even among neighbors

ASHLAND, Ky. — Its stuccoed exterior and flowing shingles on the cross-gabled roof make it stand out as one of the most unusual homes on the block, but to Cecil and Judy Fannin, it’s just home.

Almost a century old and one of the most unique homes on Lexington Avenue in Ashland, the house showcases a blend of early-20th-century architecture as well as features representing the Italian Renaissance era.

Built around 1920 by financier and coal operator Lon Rogers, the home was added to the National Register of Historic Places in 1979.

The home has seen its share of owners, but when Judy saw that it had gone back on the market in the early 1990s, the woman said she had to have it. She had always admired the house, even considered it her favorite.

“The architecture is just stunning,” she said.

A decade later, the Fannins live in one of the most looked-at homes in Ashland. Sitting right across from Central Park, the Fannin house has been host to home tours, garden tours and front porch tours. Anyone who has ever ridden the trolley around Ashland’s Winter Wonderland of Lights has gazed into the Renaissance loggia that is the Fannin’s porch, glistening with lights, 12 to 15 Christmas trees and ornaments dangling.

Judy said many people ask to take pictures in her gardens. Brides and promgoers have also captured their special moments on the front steps or inside on the spiral staircase.

“We like people to enjoy our gardens and our home,” Judy said. “We’ve always been that way.”

When the Fannins moved in, they renovated the three-story, 12-room home to make it as close to its original look as they could.

“We tried to take it back to the years like it was,” Judy said.

Luckily, a painter that had done work on the house in previous years has kept many of the original hand-blown glass windows and lighting fixtures that had been removed.

Walking in the front door of the home, visitors see some of those original windows. The front door leads into an entry way with black and white checkered tile, original to the home also. Surrounding the walls inside the front door, hangs picture of the historic home from various times and holidays, including renderings of the home when it was built.

The entrance opens to face the large curved staircase with original stained glass window. To the left, a large living room is centered around sitting chairs and a marble fireplace, one of five in the home. Above the fireplace hangs an original impressionist painting by French artist Edmond Petitjean, although Judy said most of the paintings in the house are by local artists, which she prefers.

Opposite the fireplace is an antique bibliotheque that houses treasures from Judy and Cecil’s many trips around the globe as well as Cecil’s collection of Doris Linder porcelain horses.

The dining room boasts an impressive, antique English credenza, Spanish woven cane chairs at a glass top table and an antique chandelier that once graced the Dodge family estate in Michigan.

A swinging door leads into the kitchen, themed with roosters and chickens, where baskets full of fresh-picked produce from Judy’s vegetable garden sit among bouquets of fresh-picked dahlias and zinnias.

The breakfast nook off the kitchen and under the staircase overlooks the fishpond. Pixie and Puff, the family Persian cats, can often be found lounging on the wooden bench seat or sleeping in a decorative bowl on the tabletop.

The second floor of the home has bedrooms and connecting baths. The master bedroom has a canopy bed, antique armoires and sitting room overlooking the backyard.

As impressive as the interior of the home is, Judy said she spends much of her time outside in her gardens.

The backyard features a patio surrounded by greenery and walkways with wisteria-covered trellises. Across from the alley in back, Judy has another garden filled with more than 130 dahlia plants, zinnias, four kinds of pumpkins and elephant ears.

She also grows gourds, which she dries and cleans and uses them for decorating in the fall. Among them are swan, snake and apple gourds.

At home in candy land

Sweet & Sassy Treats provides decadent desserts There are a lot of things that motivate people to make a change... read more