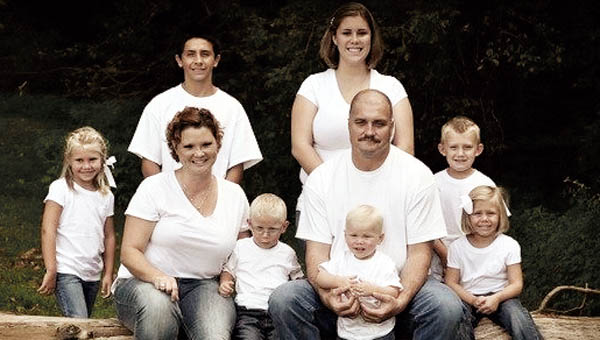 The Baker family from South Point.

When Leigh Ann and Steve Baker decided to plan a family, they had no way of knowing what was ahead of them.

The South Point couple had a daughter, Morgan, from Steve’s previous marriage, and wanted to have a child together. After years of trying to conceive and four miscarriages, the couple began to look at other options.

Leigh Ann, now 37, and Steve, now 45, looked at all their options and decided foster care was the best route for them. The couple planned on fostering until they were able to adopt one child. After fostering for a while, Corey, then 7, moved in with the Bakers and was supposed to be there for around six weeks. The Bakers were able to adopt Corey, and today he is a healthy 14 year-old.

The same year Corey was born, the Bakers received a phone call from the foster care agency that a baby had just been born and was still at the hospital, but needed to be placed in a foster home.

They agreed to pick him up.

Though Leigh Ann said there was a lot of fear and uncertainty that they wouldn’t be able to keep him permanently, when the adoption was final, Brody was 23 months old. He is now a healthy 6 year old.

The next phone call came on the way to a cheerleading competition in Maryland. The foster care agency had a 3-month-old baby, Breyanna. The Bakers took her in and cared for her during RSV and other sicknesses. When Breyanna turned 14 months old, her biological mother had another baby girl. Children’s services had been working with the biological family to get Breyanna back with her parents. The plan was for her new sister to be home for a month and then for Breyanna to return to her biological family’s home to live.

“I was there at the baby’s birth,” Leigh Ann said. “Six weeks to the day she went home, we got both of them back.”

Leigh Ann said the biological parents were caught with drug possession, and the Breyanna and her new sister Baylee were with the Bakers for about three months, but then were returned again to their biological family.

During the adoption process for Breyanna and Baylee, their biological mother became pregnant with a third child. During a King’s Island trip, the Bakers received a call that the baby was born, with the foster care agency asking if they would take in the infant.

“We kept saying we weren’t going to do it, and give someone else a chance to get a newborn,” Leigh Ann said. “Our family was good. But we couldn’t say no.” The foster agencies encourage families to keep sibling groups together.

While finalizing the adoption process on Quinton, the biological mother had a fourth baby, a son named Karson.

“He was born and it was a big decision about whether we were going to do that again,” Leigh Ann said. “We now have five car seats in the minivan,” she laughed. She said they couldn’t say no. All four adoptions were finalized in August of 2011.

Karson is now 2 and Quinton is 3, with Baylee now 4, and Breyanna the same age as Brody, 6. That’s two teenagers and five children ages 6 and under in the Baker house.

“We were going to quit at one. We weren’t going to be stingy,” Leigh Ann said. “And here we are, seven years later.”

John Swanson, director of foster care for Necco, said for him, seeing a family like the Bakers is a big reward.

“They are amazing,” Swanson said. “They literally ran out of room in their home.

“The best thing in the world, as a worker, is to see a family you’ve worked with for years, happily ever after.”

Swanson said the first step for a single person or a couple wanting to get involved in foster care is usually to send an email or call a foster care agency. He said the agencies will also go into the community to talk to families about the programs. After the initial contact, there are several weeks of foster parenting classes and training.

Background checks are also required for potential foster families, running finger prints and information through the FBI. The home and living situation goes through a rigorous check as well, including everything from finances to well-water checks and vaccinations of the family dog, Swanson said.

Swanson said there is a lot that goes into matching up a child with a foster family, looking at everything from issues the child is going through at home to things a child likes and the kind of living environment they are used to, and then try to match the foster family accordingly.

The foster family is also asked during training what type of child would best fit their family, as well as whether the family wants to only foster or foster-to-adopt.

Getting a good match for the family and the child is important.

“If the kid is coming to us from one area, we try to make sure, if we can, that they can go to the same school or same mental health provider,” Swanson said. “If they lose their friends and support, it makes it all the more devastating.”

Swanson said the ideal goal is to place the children back in their biological homes as quickly as possible, with the state working with the parents through rehabilitation and visits. When the children cannot be returned to the home, they are available for adoption.

Once a child is placed in the foster home, support is provided in case a situation arises where help is needed. Staff are available and can be paged 24 hours a day.

Swanson said that while not every situation has a fairy-tale ending, there are many success stories. He said there are former foster care children who will still call him to keep him updated on their lives, when they get married and when they are having children.

Swanson said the foster care agencies all have the same goal, to provide a good, nurturing loving environment for the children.

Swanson said Leigh Ann and Steve Baker have done that for their children.

“It’s been a wild ride, that’s for sure. And it’s still going,” Leigh Ann said. “I can’t imagine my life any differently than it is now.”

The Lawrence County Health and Wellness Initiative has teamed up with City National Bank to lease a building that will... read more