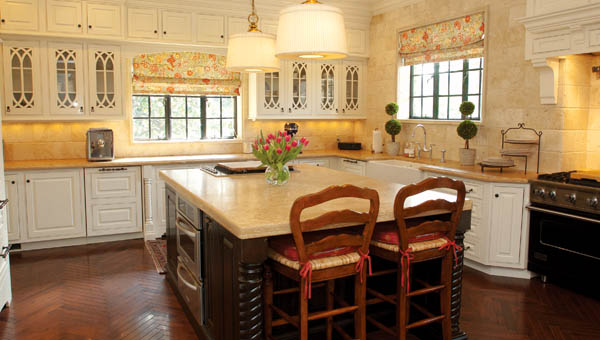 On the southeast corner of Spring Hill Cemetery in the suburbs of South Huntington, inside the curve of Washington Boulevard, sits a historic representation of eclectic residential architecture and exceptional craftsmanship. Photography | Jessica St. James

HUNTINGTON, W.Va. — On the southeast corner of Spring Hill Cemetery in the suburbs of South Huntington, inside the curve of Washington Boulevard, sits a historic representation of eclectic residential architecture and exceptional craftsmanship.

You can see it in the tool marks where Italian masons painstakingly hand-chiseled each and every rough-cut stone of the façade.

You can see it in the curved and rolling roof with its valleys, hips, ridges and four stone chimneys.

And you can feel it in the history of those who have called Ricketts Place their home including the Darby family who live there now.

Listed on the National Register of Historic Places, the 16,000-square-foot home was designed by local architect Levi J. Dean in the mid-1920s for prominent landowner and developer John G. Ricketts.

The layout of the interior rooms and especially the rolling, thatch-resembling roof, are prominent English Tudor designs.

In contrast, the horizontal shape of the structure and its large, open floor plan represent the emerging prairie style of the era, revolutionized by Frank Lloyd Wright.

Melissa said she and her husband, Darrell, felt Ricketts Place was a once-in-a-lifetime house. They bought it in 2009 from the family of Dr. Sarah Louise Crockrell Stevens, whose family had lived in the home for more than 50 years.

The Darbys and their four children are only the fifth family to reside there.

Although the architectural footprint of the home remains largely the same as it was when the home was finished in 1925, some modifications have been made, mostly by the Stevens family. The Darbys also began a remodeling process that is ongoing, but keeping the home authentic has been a priority, they said.

Darby said she worked closely with Barboursville, W.Va., interior designer Connie Breece to get the perfect look to complement the historic house.

“Since I had worked for Melissa on her former house, she knew that we had very similar tastes and that we wanted to keep the architecture and the history of the home, keep the integrity intact,” Breece said of the project. “Not putting things in it that were too trendy. Bringing in marble and stone that would have been in that 1920s era.”

From the three-arched, stone entrance pavilion, French doors open into a large reception hall. Off the hall are a dining room, living room and a sunroom, named by the Stevens family, the Pagoda room.

The living room is one of the largest spaces in the house and has a 20-foot bow window with five casement windows.

The dominant element of the living room is one of the most unique items of the home. When the house was built, Ricketts imported a Scottish mantelpiece to accompany the fireplace in the living room.

The dark wood is hand-carved from floor to ceiling and has a yellow and red coat of arms in the center.

On either side of the fireplace, French doors exit to a sunroom.

The pagoda room was originally an outdoor courtyard. The Stevens family enclosed the area and intended it to resemble a Chinese pagoda. The room still boasts the original colored Italian tile and a functional koi fish fountain.

The kitchen is a prime example of how the Darbys wanted modern conveniences added to the home without sacrificing aesthetic historical beauty.

“The kitchen gives you the feeling that it evolved over time a little bit rather than having everything done at the same time,” Melissa said.

Travertine walls and a farm sink also add to the kitchen’s rustic look.

Copper pots hang over a 60-inch Viking range and a built-in refrigerator and dishwasher go unnoticed behind the custom cabinetry.

At the back of the home, the master bedroom and bath are like a cozy getaway.

“When we come into the master suite, it feels like an apartment,” Melissa said. “It’s very quiet. It’s very private.”

The room is painted in a rich chocolate brown which complements the fireplace with oversized logs.

What was previously a sunroom was transformed by the Darbys into a large dressing room.

The bathroom also has a wet bar, a feature added by the Darbys due to the distance to the kitchen.

The second floor, originally a ballroom and maid’s quarters, was finished by the Stevens family to add bedrooms for their children. A greenhouse was also added.

“The roof line is what makes the second floor so interesting,” Melissa said. “It just has a much cozier feeling. There are lots of nooks and crannies on the second floor. The ceilings come down at angles. It’s just really unique. I love it.”

Although nearly all aspects of the home’s décor are custom items, Darby said she didn’t want to over-decorate.

“I wanted it to be luxurious but in a very understated and quiet way,” Melissa said. “I didn’t want people to feel intimidated. I wanted people to feel so comfortable and welcome when they sat down that they didn’t want to leave. And I think we achieved that.”

Recently, the Darbys found out they would have to move out-of-state for professional reasons.

Although Melissa said she will miss the home dearly, said she has always gotten the impression that everyone who had lived there was happy, and that another family will love Ricketts Place, too.

“It’s the kind of house that makes you feel, make you aware that you’re really just the caretaker of the house,” Melissa said. “You don’t own the house. You’re taking care of it for the time you live in it and then, if you do it well, you’re passing it on for someone else.”

The ovens are hot; the molten glass is glowing at the end of those poles but the final product is... read more