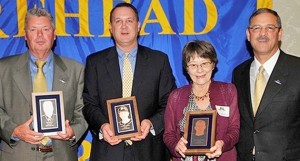 MOREHEAD, Ky. — Ernie DeCourley preferred to talk about the youth football league teams he coached than his own football career. Morehead State University decided it was time to talk about both.

Morehead State honored the late great DeCourley when they inducted him into the school’s Athletic Hall of Fame.

DeCourley coached youth football teams in Ironton for more than four decades with his friend B.J. Hannon. But before his arrival in Ironton, DeCourley was an All-Ohio Valley Conference football tackle who was drafted by the San Francisco 49ers.

“It wasn’t his football that he was concerned about. He taught (the youth) the better ways of life and then he taught them football. He carried on the good life lessons,” said Vicki DeCourley, Ernie’s wife.

“I don’t know anybody who said anything bad about Ernie. He and B.J. made a great team and they really cared about the boys.”

The Morehead State athletic department honored DeCourley along with two other former Golden Eagle standouts as the 2012 Class was inducted last Friday night at the Hall of Fame banquet. They were also recognized during the homecoming football game on Saturday against Pioneer League opponent Campbell.

“The Athletic Hall of Fame is the highest individual accolade our department can award,” Director of Athletics Brian Hutchinson said.

“It’s a pleasure to welcome these accomplished individuals to the prestigious list. In addition to being regarded among the elite individuals of their time, these three inductees were also members of OVC championship programs.”

DeCourley ranked among the OVC’s top linemen during his two-year MSU career. A transfer from Northwest Mississippi Junior College, DeCourley was the team’s tallest lineman at 6-foot-5.

Playing both offensive and defensive tackle, DeCourley was named All-OVC in 1961 and 1962. He culminated his collegiate career by guiding the Eagles to an OVC co-championship while earning OVC Defensive Lineman of the Year.

A native of Savannah, Tenn., DeCourley was selected in the seventh round of the 1963 National Football League Draft by the 49ers. He later settled in Ironton and passed away on June 2, 2006.

Established in 1985, the Athletic Hall of Fame honors former Eagles whose achievements in athletics and as ambassadors of the university have had a profound impact on Morehead State. The Hall of Fame has enshrined 125 members.

DeCourley was married to the former Vicki Parard. The couple had three children, daughters Michelle DeCourley Coker and Kara Ann DeCourley, and a son, the late Chris DeCourley who died in August.

Meyer: this team is special

COLUMBUS (AP) — Nine games and as many wins into his first season at Ohio State, Urban Meyer believes his... read more