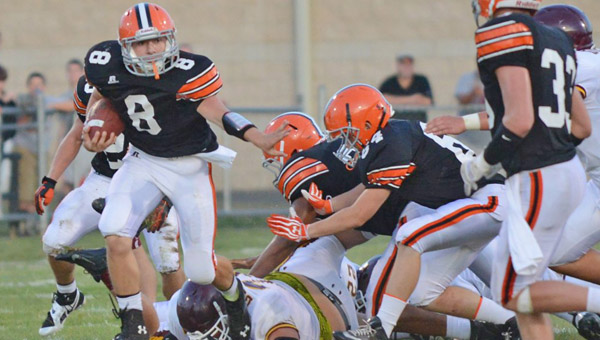 Tristan Cox might not be the straw that stirs the drink, but he certainly helps fill up the glass.

The junior quarterback turned in the best all-around performance of his young career as he helped the Ironton Fighting Tigers bounce back from a season opening loss to beat the Russell Red Devils 35-14 Friday at Tanks Memorial Stadium.

Cox ran 13 times for 139 yards and two touchdowns, completed 3 of 5 passes for 61 yards and a score and returned an interception 60 yards for another touchdown.

Ironton lost its opener 49-12 to Wheelersburg and had four turnovers plus a bad snap on a punt.

The Fighting Tigers did have two turnovers with an interception leading to a Russell touchdown this week, but Vass said the team proved resilient.

“I thought we played better than last week, that’s for sure. We still made young mistakes and it wasn’t perfect and it wasn’t pretty at times, but overall the effort was there and they played pretty for the most part,” said Vass.

“These guys could have hung their heads. You don’t know how they’re going to respond. I though they responded well.”

“I thought we could run the ball, pound on them a little bit after watching film. We decided to go with that and try to take care of the football a little bit more,” said Vass.

“We thought we could move the ball on them on the ground. That’s what we were going to start off with and try to ease into the game, get into the flow a bit. We took care of the ball better.”

The defense was equally up to the task. The Fighting Tigers limited Russell to 95 total net yards and a mere four first downs.

“The defense won the game,” said Vass. “I thought the defense stepped up tonight. They did a nice job. They controlled the line of scrimmage for the most part. (Russell) didn’t move the ball real well, and when they did move it they had to earn it. They never marched down the field. Defense probably won the game tonight.”

Ironton was in its familiar T-formation to start the game and went 80 yards in seven plays on the opening drive of the game. Cox hit Lucas Campbell on a 48-yard pass play as the sophomore end scored his first career touchdown.

Hunter Klaiber kicked the first of five extra points and it was 7-0 at the 8:32 mark.

Ironton drove to the Russell 19 later in the quarter before the drive sputtered. The defense forced a punt and on first down Cox bolted 68 yards for a touchdown and it was 14-0 three plays into the second quarter.

Russell got a 47-yard punt return from Ethan Thompson to the Ironton 9-yardline with 1:04 left in the half. Nick Conley scored on the next play and it was 14-6 at the break.

“Russell executes and they’re not going to turn it over. They’re a well-oiled machine on offense. They keep it simple with that wing-T. They had some success off the edge for a while but we made a few adjustments just trying to target that and that helped the second half,” said Vass.

The Red Devils tied the game with 6:54 left in the third quarter thanks to their defense. Jackson McKnight intercepted a pass and returned it 77 yards to the 1-yard line. Conley scored on the next play and ran for the conversion.

But turnabout is fair play. Following an Ironton punt, Cox picked off a pass and ran it back 60 yards for a touchdown and it was 21-14 at the 2:51 mark.

Joe Bowling had a sack on third down and Russell was stopped on a fourth down play to begin the fourth quarter and Ironton took over at the Red Devils’ 47.

The Red Devils went into a passing mode but a sack by Trevor Easterling for a loss of 10 yards and three other plays netted just 6 yards as Ironton took over at the 16.