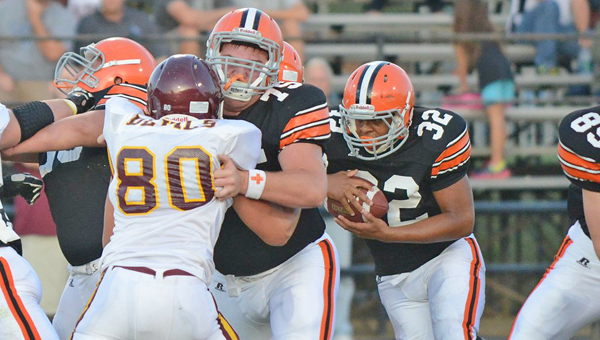 The Ironton Fighting Tigers will host the Amanda-Clearcreek Aces at 7:30 in a game of perennial playoff programs.

“They’re a lot like us. They have a lot of tradition and pride. They’ll come in here ready to play,” said Ironton coach Mark Vass.

The Fighting Tigers’ playoff record is 44-28.

The Aces have an impressive bunch of numbers as well. They have 18 playoff appearances with two state titles of their own in 1999 and 2000. They have been runners-up three times, state semifinalists eight times and have compiled a 33-16 postseason record.

The two teams have met just once. Ironton won 12-9 at Amanda-Clearcreek in the first round of the 2011 playoffs.

Ironton (1-1) has one of its youngest and most inexperienced teams in school history this year. The Aces ran into that problem last season when they went 3-7.

Amanda is 1-1 this year after beating Zane Trace 24-0. They lost to state power Columbus Bishop Hartley 38-6 in week one.

In the opener, the Aces trailed Hartley just 17-6 at the half.

Against Zane Trace, Amanda led 3-0 at the half but broke the game open with 14 points in the fourth quarter.

The Aces try to use a balanced offense led by Ayers and Landrum. The top returning players are offensive linemen Seth Hollett and Mack White, linebacker Steven Fearnow and running back and defensive back Dusty Riffle.

“They have a couple of good running backs and their quarterback can run or throw,” said Vass.

White will be the center, Elias Conkel and Nick Lumbard are the guards, Cody Kelly and Hollett are the tackles, Mario Mellucci the tight end, Jared Iles the split end and the slot is shared by Stephen Templeton and Brayden Cordle.

Riffle will be the fullback and Ayers the halfback.

“Their offensive line does a nice job coming off the ball,” said Vass.

Defensively, Lumbard is the nose guard, Kelly and Conkel the tackles, and Cordle and Templeton the ends.

Cole Genders and Fearnow are the linebackers. Devon Boyer and Riffle are the cornerbacks with David Mellucci and Ayers at the safety spots.

“They’re not a big team defensively, but they like to use their quickness and they’re pretty aggressive,” said Vass.

CINCINNATI (AP) — The good news for the Reds was that they ended their streak of scoreless innings. The bad... read more